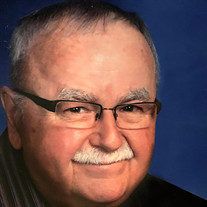 Winston L. Heisey, 80, of Palmyra, passed away on Saturday, December 18, 2021 at Londonderry Village. He was the husband of Elsie M. (Fackler) Heisey, with whom he celebrated 58 years in marriage. Winston was born in Lebanon on February 21, 1941 to the late John A. and Bertha A. (Young) Heisey. He was a proud 1959 Cornwall High School graduate. He was the owner and founder of Heisey Machine Company for over 40 years and designer of the original Heisey floatation sub. He was a member of Annville Church of the Brethren, where he was Deacon and sang in the church choir. He also sang in different men’s choirs and quartets. He volunteered with disaster work camps, traveling to several states after emergencies. He was a member of the former A-C Jaycees and volunteered with Brethren Volunteer Services. He and his wife enjoyed traveling to every state in the United States at least once. He enjoyed going to his cabin, eating ice cream and scrapple, watching Western movies, and his history book collection, especially books on the Civil War. He had over 150 history books. For 40 years, he enjoyed playing cards with their dear friends. His greatest love was spending his life with his wife and beloved family. Surviving in addition to his wife are his children, Jeffrey L. Heisey and his wife Pamela, Debra K. Farese and her husband Jeffrey, four grandchildren, and siblings, Jean Heisey, David Heisey, Kathleen Turner (Heisey), Robert Heisey, Andrew Heisey, and Russell Heisey. He was preceded in death by his siblings, John Heisey and Peter Heisey. There will be a viewing on Thursday, December 23, 2021, from 6PM – 8PM at Kreamer Funeral Home and Crematory Inc., 618 E. Main Street, Annville. There will be an additional viewing December 24th 10AM at Annville Church of the Brethren, 495 E. Maple Street, Annville followed by a memorial service at 11AM. Interment will be in South Annville Cemetery. In lieu of flowers, contributions can be made to his church, address above, or to Londonderry Village, 1200 Grubb Road, Palmyra, PA 17078 in his memory.

Winston L. Heisey, 80, of Palmyra, passed away on Saturday, December 18, 2021 at Londonderry Village. He was the husband of Elsie M. (Fackler) Heisey, with whom he celebrated 58 years in marriage. Winston was born in Lebanon on February 21,... View Obituary & Service Information

The family of Winston L. Heisey created this Life Tributes page to make it easy to share your memories.

Winston L. Heisey, 80, of Palmyra, passed away on Saturday, December...

Send flowers to the Heisey family.