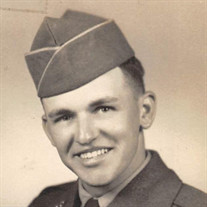 Warren W. “Jim” Landis, 88, of Annville passed away on Friday, September 10, 2021 at The Hershey Medical Center. He was the husband of Arlene J. (Fisher) Landis, with whom he celebrated 68 years in marriage. Jim was born in N. Annville Twp. on December 17, 1932 to the late John and Dorothy (Feaser) Landis. He had attended Annville High School and received his diploma years later after returning home from Korea. He was a United States Army veteran of the Korean War. He retired after 32 years in the Wrapping Department at Hershey Foods. He was a member of St. Mark Lutheran Church, Annville where he served as an usher, was on the Property Committee and on the Kitchen Committee. He was also a member of Annville American Legion and Hershey Union 464. Jim was a Little League and Legion baseball coach. He was an umpire for the Over 40 softball league. He enjoyed scrapbooking, going to yard sales, watching baseball, wrestling and NASCAR. He was a Dallas Cowboys, Phillies and Penn State fan. Surviving in addition to his wife are his sons Thomas E. Landis and wife Deborah (Deck) Landis of Lebanon, and James W. Landis and companion Tammy Fasnacht of Walnutport; four grandchildren Jennifer (Tilley) Miller, Matthew Tilley, Trevor Landis and Danielle (Landis) Reisinger; seven great-grandchildren, and siblings John Landis of Palmyra, and Audrey Shuey of Jonestown. He was preceded in death by his siblings, Karl Landis, Randall Landis, Phyllis Himmelberger and Katherine Grubb. A funeral service will be held on Thursday, September 16, 2021 at 11AM from Kreamer Funeral Home and Crematory Inc., 618 E. Main Street, Annville. Interment will be in Grand View Memorial Park with military honors. A visitation will be held from 10AM until 11AM at the funeral home. Masks are encouraged for those in attendance on Thursday. In lieu of flowers, contributions can be made to his church, St. Mark Lutheran Church, 200 E. Main Street, Annville, PA 17003.

The family of Warren W. "Jim" Landis created this Life Tributes page to make it easy to share your memories.

Send flowers to the Landis family.