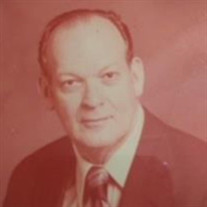 Vincent Dennis Ortwein, Sr., 95, of Lebanon and formerly of Fountain Hill and Lower Nazareth, died Sunday, May 16, 2021 in Saucon Valley Manor, Hellertown. He was the husband of the late Marion J. (Flickinger) Ortwein who died in 2019. Born in Bethlehem on July 17, 1925, he was the son of the late Francis and Bridget (Gallagher) Ortwein. He was employed as a general foreman in the Heat Treatment Department for Bethlehem Steel Corp., Bethlehem. Vince enlisted in the US Navy at the age of 17, serving as a coxswain in the Atlantic and Pacific Theatres during WWII. He attended the Lebanon VA Chapel and Holy Ghost Church of Bethlehem. He was a member of the Steelworkers Union from 1942-1960, and a former member of the Bethlehem Steel Club, Fountain Hill Beneficial Society, and Fountain Hill Hose Company. He was an avid Notre Dame and Lehigh football fan attending as many home games as possible. He could fix just about anything, from cars to furniture to lighting and electrical, and he loved to deliver his homemade eggnog to family and friends. Surviving is: daughter, Patricia A. Bubp of Charlotte, NC; son, Vincent D. Ortwein, Jr. (wife Gloria) of Annville; six grandchildren, Robert Bubp, Jr. (wife Krista), Wendy Bubp, Rebecca Bubp, Patrick Bubp (wife Amber), Michael Ortwein (wife Theresa), and Amy Gross (husband Matthew); six great-grandchildren, Annika Bubp, Ella and Max Ortwein, Julia, Holly, and Joelle Gross; and many nieces and nephews. He was preceded in death by his son-in-law, Robert Bubp, Sr., and all 12 of his siblings, including brother Thomas A. Ortwein, Sr., who died on April 27. Memorial Mass will be celebrated on Wednesday, May 26, 2021 at 11:00 AM at St. Paul the Apostle Catholic Church, 125 S. Spruce Street, Annville. Inurnment will be in Indiantown Gap National Cemetery with Military Honors. A visitation will be held on Wednesday from 9:45-10:45 AM at the Kreamer Funeral Home and Crematory, 618 E. Main Street, Annville, prior to the service. Contributions may be made in his memory to St. Jude Children’s Research Hospital, 262 Danny Thomas Way, Memphis, TN 38105 or the Alzheimer’s Association, 2596 Interstate Drive, Suite 100, Harrisburg, PA 17110

Vincent Dennis Ortwein, Sr., 95, of Lebanon and formerly of Fountain Hill and Lower Nazareth, died Sunday, May 16, 2021 in Saucon Valley Manor, Hellertown. He was the husband of the late Marion J. (Flickinger) Ortwein who died in 2019. Born... View Obituary & Service Information

The family of Vincent Dennis Ortwein, Sr. created this Life Tributes page to make it easy to share your memories.

Vincent Dennis Ortwein, Sr., 95, of Lebanon and formerly of Fountain...