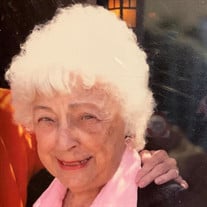 Theodora M. “Doris” Presley, 98, of Harrisburg, PA, passed away on Saturday, January 16, 2021 at Arden Courts of Harrisburg. She was the wife of the late Lt. Col. John George Presley who passed in 1983. Her son, John Russell Presley, also preceded Doris in death in 2008. Doris is survived by her daughter, Ann Viozzi and her husband Vince (of Annville Pa), grandchildren, Tony Viozzi and his wife Vanessa (of Annville PA), Genna Viozzi and her husband John Fillat (of Philadelphia), Alanna McMullan and her husband Marc (of Linglestown PA), Timothy Presley (of San Francisco), Sean Presley (of Santa Rosa CA), and great grandchildren, Dominic, Olivia, Anthony, Ryan, and daughter-in-law Patti Hughes (of Carmel CA), wife of the late John Russell Presley. Doris and John were married in 1944 and spent the next 20 years raising their family in the Marine Corps. They moved from California to New Jersey in the 60s where John worked for the Federal Aviation Agency. Upon that retirement, John and Doris moved back to California, spending a few years traveling throughout the United States and Canada in their RV. After John’s death, Doris stayed in California and continued to travel, never missing an opportunity to go to Europe, Mexico, and explore more of the States. She loved playing bridge, enjoyed bowling, and was an avid reader. She played golf on a regular basis and loved going to the casinos, and socializing with friends. Doris attended the San Diego Padres’ baseball games and took many trips to their spring training camp in Arizona. One of her favorite spots was the San Diego Musical Theatre and Playhouse, as well as the San Diego Zoo, and San Diego Museum of Art. Doris had a love of Mexican food and taught her entire family to enjoy the same. Doris was born in Columbus, OH on May 6, 1922, to the late James and Margaret (Klocki) Mitchell. She was raised in Encinitas and graduated in 1940 from San Dieguito High School. She was a member of the Immaculate Heart of Mary Catholic Church in Ramona CA. Services will be private. In lieu of flowers, contributions can be made to Ronald McDonald House Charities, www.rmhc.org.

The family of Theodora M. "Doris" Presley created this Life Tributes page to make it easy to share your memories.

Send flowers to the Presley family.