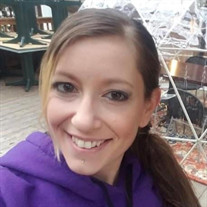 Summer Elizabeth (Leach) Boltz, 36, of Lebanon, went to rest in the arms of the Father on Saturday, January 23, 2021, when she passed in a tragic house fire. Summer was born March 18th, 1984, in Dickinson, ND, during an epic ice storm to William and Marie (Nepi) Leach of Leola, AR. Her dad always said that she was named Summer, because, by the time she was born, we all wished it were. She graduated from Dickinson High School and attended both the University of North Dakota and Central Lakes College before moving to Pennsylvania, where she made her life for the last 16 years. Summer’s dream was to be a crime scene technician, but life takes many turns. She worked in the service industry after her children were born in order to maximize her time at home with them. Summer was passionate, opinionated…really opinionated. She was secretly sensitive but had a big heart who felt things deeply and hid it under sarcasm and wit. Fiercely protective. Her friend says, “She was the perfect lyric to a punk song.” Every moment with her was full of the kind of friendship and love you only get from someone who lived life without restraint. Her life joys were her kids, internet memes and white claw. Summer would never leave for an overnight trip without her ridiculous childhood stuffed animal named, “Puffy.” She literally had it until her dying day. She was a fan of all things fantasy and anything Jurassic Park. Movies were her jam. Adventures with her kids, yearly trips to the beach, apple picking, Knoebels for birthday trips, giving her children grand adventures and positive memories were important to her. In addition to her parents, she is survived by her husband Mike Boltz; daughters Echo and Emmer; son Logan; sisters Billi (Marc), Tarin, and Storm (Steve); brother Seth; numerous nieces and nephews; and close friend Brian Krick. Summer’s Celebration of Life will be held at 11:00 a.m. on Saturday, January 30th, 2021, at the Kreamer & Lum Funeral Home & Crematory, 5 Camp Meeting Rd. & Rt. 72, Jonestown.

Summer Elizabeth (Leach) Boltz, 36, of Lebanon, went to rest in the arms of the Father on Saturday, January 23, 2021, when she passed in a tragic house fire. Summer was born March 18th, 1984, in Dickinson, ND, during an epic ice storm to William... View Obituary & Service Information

The family of Summer E. Boltz created this Life Tributes page to make it easy to share your memories.

Send flowers to the Boltz family.