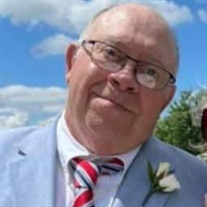 Sanford E. “Sandy” Newman, Sr., 74, of Lebanon, passed away on Tuesday, March 29, 2022, at his home surrounded by his loving family. He was the husband of Melody A. Miller Newman. On August 25th, they would have celebrated their 43rd wedding anniversary. Born in Mt. Union on April 10, 1947, he was the son of the late Sanford S. and Mary Harmon Newman. Sandy had served for nearly eight years in the U.S. Air Force and he served during the Vietnam Conflict. After seventeen years, he retired from Brentwood Industries in Lebanon where he had been the shipping supervisor. He was a member of the Trinity United Methodist Church, Lickdale. He was also a life member of the DAV, the VVA Harrisburg Chapter #542, the American Legion, VFW and the Huntingdon County Sports Hall of Fame. He loved to play golf and he enjoyed playing and coaching football. Sandy loved people and he especially loved spending time with his family. In addition to his wife, he is survived by his sons Paul S. husband of Lara Kern of Fredericksburg and Sanford E. Newman, Jr., and his wife Danielle of Annville; Kathy S. wife of Rob Cummins of Lebanon; nephew “Son” Richard “Dickie” Newman of Mt. Union; niece Susan wife of Kevin Smith of Spokane, WA; grandchildren Miranda N. Kern and Connor J. Cummins; and his great granddaughter Anya Rose Coy. He was preceded in death by his twin granddaughters Amanda L. and Alecia M. Kern, and brothers Robert and Richard Newman. A viewing will be held on Monday, April 4, 2022, from 5:00-7:00 p.m. at the Trinity United Methodist Church, 98 Fisher Ave., (Lickdale) Jonestown. The service will be held at 11:00 a.m. on Tuesday, at the church. There will be no viewing prior to the service. Interment with military honors will follow at Indiantown Gap National Cemetery. In lieu of flowers, memorial contributions may be made to his church. Kreamer & Lum Funeral Home & Crematory, Jonestown, is honored to serve the family.

The family of Sanford E. "Sandy" Newman, Sr. created this Life Tributes page to make it easy to share your memories.