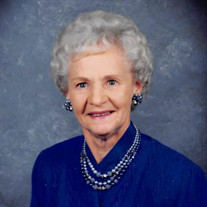 Ruth E. (Peters) Kreiser, 91, of Palmyra, PA died peacefully in her sleep at the Penn State Milton S. Hershey Medical Center on February 4, 2021. Ruth was born on May 26, 1929 to John C. Peters and Lottie D. (Stroup) Peters in Mt. Pleasant Mills, PA. She was a resident of Londonderry Village in Palmyra, PA. She and her husband of 70 years, Lloyd Kreiser, also a resident of Londonderry Village, were married on September 30, 1950. Ruth was a member of the First Evangelical Church in Palmyra, PA. She was predeceased by four siblings: Vera (Peters) Dietz, Earl Peters, Doris (Peters) Sprenkel and Shirley (Peters) Wetzel and a grandson, Darrell J. Kreiser. Ruth is survived by her husband, Lloyd Kreiser, children Patricia J. (Stephen) Geesaman of Annville, PA, Darrell L. (Sandra) Kreiser of North Port, FL, Deborah K. (Jay) Johnson of Elizabethtown, PA, Jeffrey A. Kreiser of Harrisburg, and Terry L. (Mariann) Kreiser of Palmyra, PA. She is also survived by 9 grandchildren and 14 great-grandchildren. Ruth worked as an LPN until her marriage to Lloyd. She became a stay-at-home mom who made homemade bread and baked and decorated cakes for special occasions. She enjoyed a variety of crafts and, in later years, took classes in painting with oils and watercolor. She filled her home with these paintings. Services will be held at the convenience of the family, with burial in Indiantown Gap National Cemetery. In lieu of flowers, contributions may be made in Ruth’s memory to Londonderry Village Benevolent Fund, 1200 Grubb Road, Palmyra, PA 17078.

The family of Ruth E. Kreiser created this Life Tributes page to make it easy to share your memories.

Send flowers to the Kreiser family.