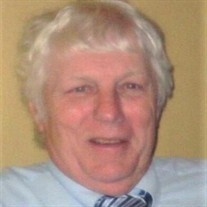 Ronald R. “Ronnie” Houser, 84, of Bethel, passed away on Sunday, February 6, 2022, at his home. He was the husband of Carol A. Hiester. Born in Lebanon on March 4, 1937, he was the son of the late Raymond and Verna Hostetter Houser. He graduated with the South Lebanon Class of 1955. He retired in 2018, from Keener Electric in Lebanon, where he had worked as a motor winder for over 55 years. He loved golfing and was a member of the Blue Mountain Golf Course. He was a Penn State and Eagles fan and enjoyed hunting, fishing, being in the outdoors and especially spending time with his grandchildren and great grandchildren. In addition to his wife, he is survived by his children Scott E. husband of Catherine Houser of N. Annville Twp., Rochelle L. wife of Kevin King of Lebanon and Bradley T. husband of Sara Hiester of Mechanicsburg; brothers Leon E. Houser of Cornwall, Glenn R. Houser of Rexmont, Gary L. Houser of Camp Hill and Dennis L. Houser of Cornwall; grandchildren Melissa Mays, Matthew Houser, Angie Boris, Joe Houser, Caitlyn King, Hannah King, Chelsea Roberts and Morton Hummer; and nine great grandchildren. He was preceded in death by his son Dr. Steven E. Houser, brothers Bruce and Claude Houser, and his sister Joyce Geib. Funeral services will be held on Thursday, February 10, 2022, at 11:00 a.m. at the Kreamer & Lum Funeral Home & Crematory, Jonestown. A viewing will be held one hour prior to the service. Interment will follow at Cornwall Cemetery. In lieu of flowers, memorial contributions may be made to the woundedwarriorproject.org.

The family of Ronald R. "Ronnie" Houser created this Life Tributes page to make it easy to share your memories.

Send flowers to the Houser family.