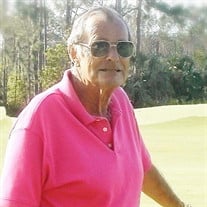 Robert G. “Bob” Wilkerson, Sr. 88, of Palmyra, passed away on Tuesday March 9, 2021, after a long battle with Alzheimer’s disease. He was the husband of Joyce (Booth) Wilkerson, with whom he celebrated 69 years in marriage. Bob was an entrepreneur and small business owner from Herkimer, NY, born in Montgomery, WV on April 8, 1932 to the late Dr. William Velpoe Wilkerson and Alice (Vining) Wilkerson. He served his country as a marine during the Korean conflict years. He was a proud member of The Quiet Birdman Club in Rome, NY, and the American Electroplater’s Society in Utica. Bob was an avid private pilot who enjoyed flying his small plane for business or just to punch holes in the sky. When not in the air, he loved golfing skiing, boating, and spending time with his family at their lake property in the Adirondacks. Surviving in addition to his wife are his sons, Robert G. Wilkerson, Jr., and his wife Diane of Richmond, VA, son W. Scott Wilkerson, and his wife Cory of Palmyra, PA, son David B. Wilkerson of Charlotte, NC, son Glen E. Wilkerson and his wife Jeannie of Utica, NY. Grandchildren include Jason Wilkerson, Utica, NY, Jennifer Wilkerson, Herkimer, NY, Jaime Hill and her husband Michael of Charlotte, NC, Jodi Wilkerson of Charlotte, NC, Justin Wilkerson of Portland, OR, Jeffrey Wilkerson of Manheim, PA, Daniel Wilkerson and wife Elizabeth of Pittsburgh, PA, and great granddaughters Jordan Wilkerson of Richmond, VA, Hannah Minguela of Herkimer, NY, and Mia Hill of Charlotte, NC and great grandson Tyler Hill of Charlotte, NC. Bob also leaves a brother Dr. James E. Wilkerson and his wife Kaye of Detroit, MI, and his sister-in-law Sandra Wilkerson of West Virginia. He was preceded in death by his brother, Thomas D. Wilkerson of West Virginia. The family will be holding a memorial service at a later date. In lieu of flowers, contributions can be made in Bob’s name to The Alzheimer’s Association, 2595 Interstate Drive, Suite 100, Harrisburg, PA 17110.

The family of Robert G. "Bob" Wilkerson, Sr. created this Life Tributes page to make it easy to share your memories.