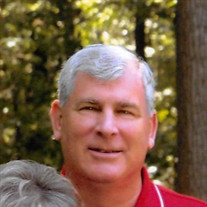 Robert E. “Bob” Baker, 77, of Annville, passed away on Friday, December 17, 2021. He was the husband of Ann M. (Weyant) Baker, with whom he celebrated 55 years in marriage. Bob was born in Roaring Spring, PA on April 18, 1944 to the late Charles A. and V. Romaine (Replogle) Baker. He obtained his bachelor’s degree from Bridgewater College in Virginia where he played football and sang in various music groups including quartets. He was inducted into the Bridgewater Sports Hall of Fame. He was a schoolteacher at Bedford High School and the owner/operator at Ag-Pak Animal Nutrition. He taught Sunday School and enjoyed being a Youth Advisor. He was a member of GracePoint Church, Palmyra. He enjoyed football, golf, and spending time with his beloved wife, children, grandchildren, and great grandchildren. Bob was a founding member of New Covenant Christian School in Lebanon. Surviving in addition to his wife are his children; Kelly A. wife of Tim Elliott of Jonestown, Amy D. wife of Christopher Keller of Lebanon, Angela S. Baker of Lebanon; five grandchildren, Braden husband of Kari Elliott, Cady Elliott, Cody husband of Katy Keller, Trevan Elliott, Mikaila wife of Rob Hess; two great grandchildren, Graham Keller, Laine Keller; siblings, C. William Baker (Rita) of New Enterprise, PA, Donna Myers (Glen) of Hershey, Belva Slagenweit (Paul) of Everett, PA, Betty Baker of New Enterprise, PA and Linda Lamb of Michigan. He was preceded in death by his sister Carol Hess. A Celebration of Life will be held on Saturday, January 8, 2022 at 2PM from GracePoint Church, 740 Leon Ave, Palmyra. Interment will be held privately. In lieu of flowers, contributions can be made to New Covenant Christian School, 452 Ebenezer Road, Lebanon, PA 17046, or to GracePoint Church, address above.

The family of Robert E. "Bob" Baker created this Life Tributes page to make it easy to share your memories.

Send flowers to the Baker family.