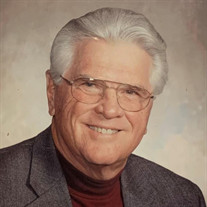 Richard A. Reich, 84, of Lebanon, passed away on May 8, 2022, after a long battle with Parkinson’s Disease. Richard was born on January 1, 1937, to Morris and Malinda Reich, Lebanon, PA. Richard (Dick) Reich was longtime owner of Reich Realty with emeritus status in the National Association of Realtors and a past President of the Lebanon County Board of Realtors. He was a veteran of the US Army National Guard. He was a member of several community organizations including the Lebanon Rotary and dedicated supporter of the American Cancer Society. He loved the game of golf and was a member of the Lebanon Country Club for many years. Richard was predeceased by his parents, and brother Neal. He is survived by his wife Gail (Kreider) Reich and 3 sons: Jeff, wife Dori (Gassert), of Florida; Randy, wife Mindy (Heisey), of Texas; and Rob, wife Amy (Stanley), of Ohio and a brother, Stan of California. Richard has 7 grandchildren and 1 great grandchild. Funeral Services will be held at Kreamer Funeral Home and Crematory, Inc. 618 E. Main Street Annville, PA 17003 on Thursday, May 12th, 2022, at 11:00 a.m. A public visitation will be held on Thursday from 10:00 a.m. to 11:00 a.m. at the Funeral Home. Burial with Military Honors will be held at the Indiantown Gap National Cemetery. In lieu of flowers, the family request donations be made to the American Parkinson’s Disease Association at: apdaparkinson.org or mail to: American Parkinson’s Disease HQ, PO Box 61420, Staten Island, NY 10306.

Richard A. Reich, 84, of Lebanon, passed away on May 8, 2022, after a long battle with Parkinson&#8217;s Disease. Richard was born on January 1, 1937, to Morris and Malinda Reich, Lebanon, PA. Richard (Dick) Reich was longtime owner of Reich... View Obituary & Service Information

The family of Richard A. Reich created this Life Tributes page to make it easy to share your memories.

Send flowers to the Reich family.