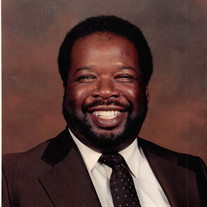 Rev. Emanuel J. "Sonny" Oliver, 76, of Lebanon, departed this life, Monday, May 31, 2021, at the Hershey Medical Center after a short illness. He was the husband of Priscilla E. Tate Oliver. On January 8th, they celebrated their 44th wedding anniversary. Born in Mayesville, SC, on February 21, 1945, and raised in Chicago, IL, he was the son of the late Rev. Robert Mack and Vernel Oliver Fortune. Emanuel served his country in Vietnam in the late 1960’s. He was addicted to heroin and found himself hopeless. He thought he would be an addict forever. One day a man told him about Jesus. Shortly after that he ended up at a Christian rehab called Teen Challenge in Rehrersburg, PA. There he learned about a new way of life, through Bible classes and he found a purpose for his life. Emanuel graduated from the Teen Challenge 12-month program, and he went on to earn his GED and a BA in Religious Education from Central Bible College in Springfield, MO. After graduating from Bible College, he returned to Teen Challenge and worked for 23 years. He had served as a teacher, counselor, speaker, fundraiser, and then he progressed to Program Director. During those years, he met his wife Priscilla Tate, who was the choir director of the well-known Teen Challenge Choir. Rev Oliver’s professional affiliations were as a former board member for Berks County Drug & Alcohol Service Providers, and a former advisory board member of the “America for Sound AIDS Policy.” He was a Certified Allied Addiction Practitioner, an Associate Pastor of the Vailsburg Assembly of God, Executive Director of Teen Challenge, Newark, NJ, and the Dean of Men at Metropolitan Bible Institute, Newark, NJ; he was Co-Founder and Director of Oasis of Lebanon, a Teacher and head counselor for Teen Challenge in Peoria, IL, Ordained Minister with the Assembly of God and In the Light Ministries, Lancaster, PA, where he is a member and served on the staff, Board Member of Light of Hope Community Service Group, Lancaster, PA, and a board member of the Norman Center in Elizabethtown, PA. For the last 48 years, Rev. Oliver has worked with men that have life controlling problems. His passion was to see men walk in the fullness of their divine purpose. In addition to his wife, he is survived by his daughter Candace P. Oliver of Lebanon; grandchildren Karina Long and Emanuel Mason; sisters Ann Wilson of Baltimore, MD, and Robinette Graham of SC; and a host of cousins. He was preceded in death by his daughter Leah M. Reed. Funeral services will be held on Thursday, June 10, 2021, at Living Waters Chapel, 1900 Jay St., Lebanon, PA. A viewing will be held from 9:30-10:30 a.m. followed by the service at 10:30 a.m. A viewing will also be held on Wednesday evening from 6:00-8:00 p.m. at the Kreamer & Lum Funeral Home & Crematory, Rt. 72 & Camp Meeting Rd., Jonestown. Interment, with military honors, will follow at Indiantown Gap National Cemetery.

Rev. Emanuel J. "Sonny" Oliver, 76, of Lebanon, departed this life, Monday, May 31, 2021, at the Hershey Medical Center after a short illness. He was the husband of Priscilla E. Tate Oliver. On January 8th, they celebrated their 44th wedding... View Obituary & Service Information

The family of Rev. Emanuel J "Sonny" Oliver created this Life Tributes page to make it easy to share your memories.

Send flowers to the Oliver family.