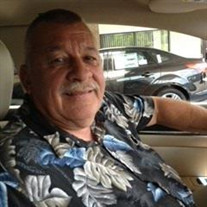 Randall L. “Randy” Rothermel, 70, of Palmyra, passed away on Wednesday, January 6, 2021 at MS Hershey Medical Center. He was the husband of Norm-Anne (Wealand) Rothermel, with whom he celebrated 32 years in marriage. Randy was born in Reading on January 29, 1950 to the late Robert and Phoebe (Reynolds) Rothermel. He was a Wilson High School graduate. He had worked as an Electronics Technical Specialist at the Navy Depot in Mechanicsburg. Randy was a US Navy Veteran, having served 32 years in the US Military. He was a real patriot. He was a member of The Campbelltown Legion, Palmyra Legion, Palmyra VFW, NRA, Saleen Mustang Club, Quittapahilla Rod and Gun Club, and Palmyra Sportsman Club, He had a passion for Ford Cars, especially his 2002 Saleen Mustang. He enjoyed hunting, going to the beach, boating, and deep-sea fishing. Surviving in addition to his wife is a brother, Robert Rothermel of Millsboro, DE, nieces and nephews, Zac Rothermel, Andrea Rothermel, Chris Wealand and Heather Wealand; and a brother-in-law, Brent Wealand and his wife Denise. He was preceded in death by his sister Robyn Rothermel. He will also be missed by his beloved rescued lab, Lola. A funeral service will be held on Thursday, January 14, 2021 at 10:30AM at Kreamer Funeral Home and Crematory Inc., 618 E. Main Street Annville. Private interment will be in Indiantown Gap National Cemetery, Annville, with military honors. A viewing will be held from 9:30AM to 10:30AM . In lieu of flowers, contributions can be made to Campbelltown American Legion, Palmyra American Legion or Homeward Bound Animal Rescue, Mechanicsburg, PA 17055.

Randall L. &#8220;Randy&#8221; Rothermel, 70, of Palmyra, passed away on Wednesday, January 6, 2021 at MS Hershey Medical Center. He was the husband of Norm-Anne (Wealand) Rothermel, with whom he celebrated 32 years in marriage. Randy was born... View Obituary & Service Information

The family of Randall L. “Randy” Rothermel created this Life Tributes page to make it easy to share your memories.

Send flowers to the Rothermel family.