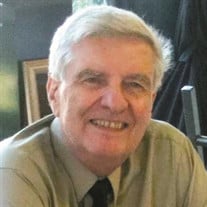 Ralph L. Lindsay, formerly of Jonestown, PA, went be with the Lord on Friday, May 14th, 2021. Ralph was born in Brooklyn, NY on December 3rd, 1935. After graduating from Baldwin High School in Freeport, Long Island, he moved to Lancaster, PA. He enrolled at Franklin & Marshall College to study Chemical Engineering. He attended college for one year but could not afford to continue his studies. He decided to remain in Lancaster County because he loved the area and the history associated with it. He met his future wife, Irene Charles, at Raub Supply, where they both worked. They married approximately one year later. They celebrated their 62nd wedding anniversary on October 19th, 2020. Ralph decided to take a correspondence course related to drawing and art, and found he had a natural talent. He was employed by Acorn Press at the time, and after three years of working there, he decided to start his own commercial art business. His main customer was Sperry New Holland, later Ford New Holland. One of his assignments was creating diagrams of various pieces of farm equipment and machinery using an ink pen, among other graphic arts related projects. He retired in 2007. In the evenings, in his spare time, he would paint using watercolors and also sometimes worked with pastels. If a Phillies game was on the radio, he would listen while sitting at the dining room table as he painted. His favorite subjects were historical buildings, such as the Star Barn, the Landis Valley Farm Museum, the Ephrata Cloister, and the Strasburg Railroad. He became a talented artist, showing and selling his work at local art shows in Lancaster, York and Dauphin counties, as well as winning awards in various competitions. Ralph is survived by his wife, Irene; son, Ralph Lindsay, husband of Catherine Lindsay, Clarksburg, WV; daughter, Pamela Lindsay, Mohnton, PA; sister, Dr. Anne Weiss, St. Petersburg, PA; brother, Donald Lindsay, Clearwater, FL; three grandchildren and five great-grandchildren. Ralph donated his remains to be studied at Hershey Medical Center. There will not be a viewing or funeral, per his wishes. In lieu of flowers, please consider donating to one of his favorite charities - The Central Pennsylvania Food Bank or The Organization for the Responsible Care of Animals (ORCA).

Ralph L. Lindsay, formerly of Jonestown, PA, went be with the Lord on Friday, May 14th, 2021. Ralph was born in Brooklyn, NY on December 3rd, 1935. After graduating from Baldwin High School in Freeport, Long Island, he moved to Lancaster, PA.... View Obituary & Service Information

The family of Ralph L. Lindsay created this Life Tributes page to make it easy to share your memories.

Ralph L. Lindsay, formerly of Jonestown, PA, went be with the...

Send flowers to the Lindsay family.