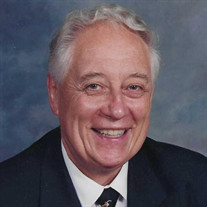 Peter F. Hewitt, 88, of Mount Gretna, died Friday, February 19, 2021 at The Lebanon Valley Home. Born in London, England on June 7, 1932, he was the son of the late Jack Frederick and Josephine A. (Solomon) Hewitt. Peter came to the US at age 21 with the Royal Air Force, working at the British Embassy, and stayed to settle in the Washington, DC area where he married and started a family. He moved to the Philadelphia area in 1966, and eventually made Mount Gretna his home in 1996. Peter started as Assistant Curator at the bookstore of the National Cathedral in Washington, DC. He worked for 47 years in religious publishing, retiring from the National Publishing Company in 1997. He loved traveling, and made semi-annual visits to England to see his parents. Peter was the ultimate entertainer and enjoyed hosting events and dinner parties. He was involved in community theater (dramas/comedies/musicals) for over 65 years as a performer, director and artistic director. A highlight of that time was hosting a celebration of William Shakespeare’s birthday on the patio of his home on April 23, 1972. An avid music lover throughout life, he played piano and performed in musicals, Gilbert and Sullivan operettas and church choirs, and also acted as choir director on occasion. Along with longtime friend Walter McAnney, Peter planned and organized organ recitals in his Gretna home for 20 years as part of the Summer Programs of the PA Chautauqua, Mount Gretna. The series grew to more than 100 people attending, providing music and fellowship to many. Surviving are his children Anne S. Hewitt and her children, Daniel H. Suslovic and William W. Suslovic, and Gillian M. Hewitt and her children, Benjamin F. Hewitt and Natasha M. Hewitt. Services will be held in private at Hope Episcopal Church in Manheim. In lieu of flowers, and to honor Peter's love of the performing arts, contributions may be made in Peter’s memory to the National Endowment for the Arts, 400 7th St SW, Washington DC 20506 (pay.gov/public/form/entry/102/), the PBS Foundation, 1225 S. Clark Street, Arlington VA 22202, or your local public television station.

Peter F. Hewitt, 88, of Mount Gretna, died Friday, February 19, 2021 at The Lebanon Valley Home. Born in London, England on June 7, 1932, he was the son of the late Jack Frederick and Josephine A. (Solomon) Hewitt. Peter came to the US at age... View Obituary & Service Information

The family of Peter F. Hewitt created this Life Tributes page to make it easy to share your memories.

Send flowers to the Hewitt family.