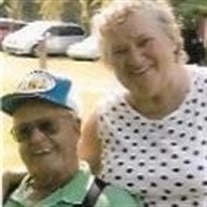 Pauline Grace Schamber Zellers, 93, of Fredericksburg, went home to her Lord and Savior on Wednesday, February 2, 2022, at her beloved home. She was preceded in death by the love of her life and husband, Earl L. Zellers, Sr., on October 18, 2010. Pauline’s other love was the farm they purchased in January 1961. They worked side by side to turn a neglected piece of land into something all who visited admired. They were respected by many friends due to their honest and hard-working ethics. Together, they raised a loving family, all of whom reflected those same values. Pauline is survived by her five children: Earl L. “Jr.” Zellers, Jr., husband of Marlene (Sholly) of Leland, NC, Russell G. “Russ” husband of Michelle (Walters) Zellers of Fredericksburg, Sylvia G. “Snookie” wife of Terry Leed of Richland, Christine M. “Teenie” wife of Michael Haag of Myerstown and Marlene J. “Tut” wife of Kenneth Dechert of Fredericksburg; nine grandchildren: Valerie wife of Michael Sweatlock of Mooresville, NC, Rebecca wife of Brian Donath of Syracuse, NY, Christopher Zellers of McKenzie, TN, Audra wife of Joe May, Jr. of Jonestown, Nicole wife of Matthew Mulvaney of Myerstown, Corey husband of Sheena Haag of Newmanstown, Amanda wife of Klaus Pedersen of Fredericksburg, Gretchen wife of Ryan Gavin of Jonestown and Heidi wife of John Worhach of Fredericksburg; fifteen great grandchildren; brother Harold Schamber of Fredericksburg; and sister Endora Miller of Harrisburg. She was preceded in death by her brother Eugene Schamber and sisters Miriam Bordner and Marian Deaven.. In life, Pauline’s passion was to embrace her faith and commitment to Union Salem Evangelical Congregational Church in Lickdale, where she was raised from birth. Her funeral service will be held at the church at 10:00 a.m. on Saturday, February 5, 2022. A graveside service will follow in the adjoining church cemetery, where she will be eternally laid to rest aside her soulmate. Thus, a noble journey will be well complete.

Pauline Grace Schamber Zellers, 93, of Fredericksburg, went home to her Lord and Savior on Wednesday, February 2, 2022, at her beloved home. She was preceded in death by the love of her life and husband, Earl L. Zellers, Sr., on October 18,... View Obituary & Service Information

The family of Pauline Grace Schamber Zellers created this Life Tributes page to make it easy to share your memories.

Send flowers to the Zellers family.