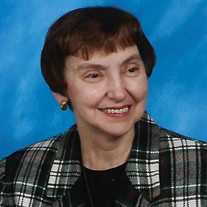 Patricia Lois (Keller) Stephens, 91 of Annville, Lebanon County, passed away on December 12, 2020 at Stone Ridge Nursing Facility. She was the wife of the late William E. Stephens, Sr who preceded her in death on March 25, 1985. Pat was born in Abington Twp. Willow Grove, PA on May 1, 1929 to the late William Bernard and Eugenia "Jean" (Willard) Keller. Pat attended and graduated from Gillespie Jr. High, Gratz High School and Philadelphia Modeling School. During her lifetime, Pat was always active and involved in too many organizations to list here. Some of her favorites were being a member of the U.S.O, P.S.O. from 1948 to 1953 and while there she established her own Hostess group known as the Stardusters. In Bucks County, she was active in the PTA, Girl Scouts, Civic Association, Board of Directors for the Greater Warminster Chamber of Commerce and served as a Warminster Township Supervisor. She was a lifelong Democrat being elected to the State Democratic Committee and the Bucks County Democratic Executive Board. After moving to Annville, she was elected to the Annville-Cleona School Board and an active member of the Lebanon County Democratic Committee. She was a member of Zion Evangelical Congregation in Annville. Pat is survived by her children: Jill Baer, wife of Donald, Annville; William E. Stephens, Jr., Willow Grove. Grandchildren: Rick Bitzer and fiance Amber, Annville; Alix Thomsen, wife of Alexa, Middletown; Nicolette Mchale, Willow Grove. Niece and Nephews: Linda Brooks, Charlotte, NC; Steven Brown, husband of Pam, Dothan, AL; and Michael Brown, husband of LeeAnn, Charlotte, NC. Great nieces and nephews: Courtney Constable, wife of Philip; Kyle Brown; Nash Brown, husband of Nicole; Jamie Berry, wife of Kelly; and Justin Brown. Great niece and nephew: Elizabeth "Liza" Constable and Jackson Brown. She was preceded in death by her sister Nancy (Keller) Brown, her brother-in-law Odell and her fiancé Sergeant Charles A. Rublee, Texas, who went MIA in 1950 in Korea. Due to current circumstances, private services will be held at this time. A public memorial service may be held at a later date. In lieu of flowers, contributions may be made to the Patricia Stephens Memorial Fund c/o Jill Baer, 436 Hostetter Lane, Annville, PA 17003 for burial expenses.

Patricia Lois (Keller) Stephens, 91 of Annville, Lebanon County, passed away on December 12, 2020 at Stone Ridge Nursing Facility. She was the wife of the late William E. Stephens, Sr who preceded her in death on March 25, 1985. Pat was born... View Obituary & Service Information

The family of Patricia Lois (Keller) Stephens created this Life Tributes page to make it easy to share your memories.

Send flowers to the Stephens family.