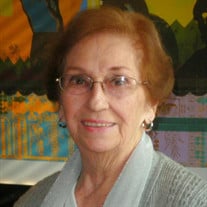 Patricia ("Pat") Joan Gardner Halsell Stima passed on Friday, January 8, 2021, with her family close by. She was preceded in death by her first husband, Harry "Huss" Halsell, co-owner of the Dixie in Lebanon, PA, and her second husband, Corporal Raymond J. Stima, PA State Police, Ret., and Chief of South Lebanon Township Police, Ret. Born in Lebanon, PA on March 30, 1931, Pat was the second of nine children of the late Helen I. Templin and Charles G. Gardner. Elected on Nov. 4, 1969 to the Cleona Borough Council, Patricia Stima was the first woman elected to any borough council in Lebanon County and the first Democrat elected to the Cleona Borough Council. As a council member, she helped to establish in Cleona a curbside recycling pilot program in conjunction with the Campbell Soup Company. A community organizer, she was instrumental in helping the citizens of Cleona petition to refuse a sanitary sewer system deal that would have overcharged Cleona property owners. Pat also served as the Cleona Playground Association president, overseeing the installation of the then new playground constructed behind Cleona Elementary School, where Pat had previously served as president of the PTA. After raising her family, she worked for Sears in Lebanon in the orders department. Pat enjoyed a wide circle of friends through her many activities, including those at the A-C Pool; at the Lewes Harbor Condominium in Lewes, DE, where she and Ray owned a vacation home; in card clubs and bowling leagues; and at St. Paul the Apostle Church in Annville, as well as in the Cleona neighborhood where Pat resided for 70 years. In her youth, she was a talented roller skater at the regional rinks, as well as a majorette with a local drum and bugle corps. Not exclusive with her abilities, she taught her daughter to twirl a baton and rollerskated on the sidewalks of Cleona with her grandchildren. Throughout her life Pat was a skilled artist, whether drawing to entertain her children and grandchildren or later taking classes in oil painting. She was a life-long, hard-to-beat Scrabble player, eventually making the transition to Words with Friends, where she could beat everyone online. Most important to Pat always was her family. Pat created special holiday and birthday memories, beach vacations and Hersheypark trips, improvised games and backyard fun, and taxied kids everywhere. In the year, 2000, she created a time capsule tradition that family has continued each decade. One of Pat's granddaughters established a weekly "Gramma Night" in Pat's home. It was an informal gathering of whatever local family could attend, and it featured laughter, catching up, sometimes food, sometimes birthday parties, always fun, support, and often critiques of whatever reality show Gramma happened to be following. Some of her granddaughters occasionally brought their friends, who considered Pat a "cool Gramma" they wished were theirs. She presided over this tradition for the past 17 years, with the final Gramma Night occurring not long before she passed. Surviving are daughters Cynnene (Halsell) Justice of Florida, Rochelle (Halsell) Ziegler (James) of Palmyra, Valerie Stima Chenail of Palmyra, Rita Stima (wife of the late Richard Stief) of Annville, son Raymond Joseph "Joe" Stima, Jr., (Shelly) of Lebanon, and stepdaughter Loretta Jakubas of New Jersey; grandchildren Andrea Tshudy (Gary), Jenelle Stumpf, Templin Chenail (Robert Slodki), Cameron Chenail, and Kacy Hess (Brandon); step-grandchildren Stacy Jakubas, Jason Jakubas (Amy), Amber Velayudham ( Kumar ), Shara Laudenslager (Scott), Lauren Randall (Jason), and Lindsay Stevens (Christopher); great-grandchildren Mary, Jack, Will, Leah, Luke, Naomi, Aari, Ava, Sophia, Taylor, Samantha, and Daphne; brothers Neil (Shirley), Glenn (Rosie), Dennis, Dean, and Shawn (Kim) Gardner, and a great number of cousins, nieces, nephews, and friends. She was predeceased by siblings Marilyn Becker, Carole Dube, and Dale Gardner. Services are private, with burial at Indiantown Gap National Cemetery. To benefit a granddaughter and others who have epilepsy, Pat requested that contributions in her memory are made to: Epilepsy Association of Western and Central PA 1501 Reedsdale Street, Suite 3002 Pittsburgh, PA 15233 https://www.eawcp.org/give

Patricia ("Pat") Joan Gardner Halsell Stima passed on Friday, January 8, 2021, with her family close by. She was preceded in death by her first husband, Harry "Huss" Halsell, co-owner of the Dixie in Lebanon, PA, and her second husband, Corporal... View Obituary & Service Information

The family of Patricia Joan Gardner Halsell Stima created this Life Tributes page to make it easy to share your memories.

Send flowers to the Stima family.