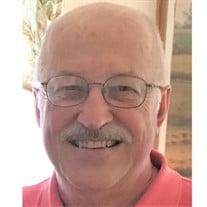 Norman Sanger, a sinner saved by God’s grace, went to be with his Lord and Savior on Friday, August 13, 2021 surrounded by his family. Norm, known to his friends and family as “Butch”, was born November 28, 1949 in Lebanon, Pa. He was the son of Clarence & Naomi (Longenecker) Sanger, who both preceded him in death. Also preceding him in death was his brother Joseph Sanger (wife Rosa), Lebanon. Norm is survived by his wife Miriam (Yeakley) Sanger, to whom he was married 50 years. They are the parents of three sons, Seth (wife Sandra) of Lancaster, Pa., Joshua (wife Simone) of Manheim, Pa., and Matthew (wife Rachel) of Leola, Pa. Norm was “grandpa” to eight grandchildren, Josiah, Nathaniel, Isaac, Emmalee, Amariah, Jude, Titus, and Heidi, who were the joy of his life. Also surviving siblings Jeannette Brandt (husband David), Annville, David Sanger (wife Ruth), Lebanon, Carol Wagner (husband Ron), Lebanon, and Dale Sanger (wife Renee), Rexmont, plus many nieces and nephews. He has many brothers and sisters (in the Lord) some with whom he worshiped at the Rexmont Christian Fellowship Church. Norm retired from The Hershey Company, and had worked throughout his career part-time for J.C.Penney, Ebersole’s Inc., and most recently for D.B. Fisher Transportation. A “Celebration of Life Viewing” will be held on Friday, August 20, 2021 from 10:30AM-12PM, at Kreamer Funeral Home and Crematory Inc., 618 E. Main Street, Annville. The funeral will be held at 12PM. There will be a graveside service for immediate family only. Rev. Jon Sanger will officiate. In lieu of flowers, contributions may be made to Voice of God Recordings, Inc. in care of Christian Fellowship & Missions, P.O. Box 51, Rexmont, PA 17085.

The family of Norman Sanger created this Life Tributes page to make it easy to share your memories.

Norman Sanger, a sinner saved by God’s grace, went to be with...

Send flowers to the Sanger family.