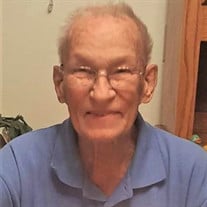 Norman R. Mack, 86, of Jonestown, passed away on Monday, June 14, 2021, at Cedar Haven. He was the husband of the late Eliza “Jane” Boyer Mack. Born in Vintondale on October 4, 1934, he was the son of the late Alfred and Carrie McFeaters Mack. Norman retired from Cleaver Brooks after 30 years of service. He was a member of Ono United Methodist Church. He was a life member of the Ono Fire Co., and the Friends of Camp Bashore. He enjoyed hunting, fishing, camping, woodworking and especially being in the outdoors. He also served in the U.S. Army National Guard during the Korean Conflict. He is survived by his son Ricky L. husband of Gerry Mack of Jonestown; daughter Debra K. Mack of Jonestown; brothers Alfred Mack, Jr. of Vintondale, Forrest Mack of Homer City, Cletus Mack of Mill Hall and Galen Mack of Vintondale; sister Vernice Rosenberg of Armagh; six grandchildren and ten great grandchildren. Funeral services will be held on Friday, June 18, 2021, at 11:00 a.m. at the Kreamer & Lum Funeral Home & Crematory, Rt. 72 & Camp Meeting Rd., Jonestown. A viewing will be held on Thursday evening from 6:00-8:00 p.m. and one hour prior to the service. Interment will follow at Salem Evangelical Cemetery, Ono. In lieu of flowers, memorial contributions may be made to the Alzheimers Assoc., 2595 Interstate Dr., Suite 100, Harrisburg, PA 17110.

The family of Norman R. Mack created this Life Tributes page to make it easy to share your memories.

Send flowers to the Mack family.