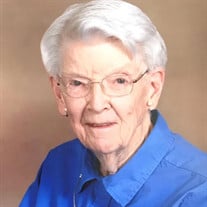 Nita M. Grubb, 89, of E. Hanover Twp., passed into the arms of Jesus on Tuesday, March 30, 2021, at her home. She was the wife of the late LeRoy B. Grubb, Jr. Born in Carloover, VA on July 1, 1931, she was the daughter of the late Clarence R. and Alva M. Peery Patteson. Nita retired from the Lickdale Elementary School, where she had been the secretary for over 25 years. She and her husband also owned and operated their poultry farm for many years. She was a member of the Ono United Methodist Church. She is survived by her sons Dennis L. and his wife Karen Grubb of Annville, Robert J. and his wife Sandra Grubb of Lebanon and Richard L. Grubb of Jonestown; her daughter Gwen M. wife of Rev. Dennis Jackson of Indianapolis, IN; brother Basil (Janet) Patteson of Bellegrove; and grandchildren Staci, Mindy, Joshua, Jamie, Joni, Julie, Troy and Alisha; and sixteen great grandchildren. She was preceded in death by her son Randy E. Grubb, great-granddaughter Margot Jackson, brother Faye (Gloria) Patteson, and sister Caroline (Penrose) Hostetter. Funeral services will be held on Saturday, April 3, 2021, at 10:30 a.m. at the Ono United Methodist Church. A visitation will be held one hour prior to the service. A private family burial will be held immediately following at Grand View Memorial Park, N. Annville Twp. In lieu of flowers, memorial contributions may be made to the Ono U.M. Church Building Fund, P.O. Box 126, Ono, PA 17077.

The family of Nita M. Grubb created this Life Tributes page to make it easy to share your memories.

Send flowers to the Grubb family.