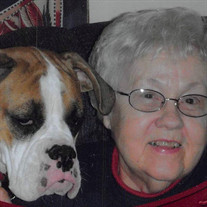 Nancy Kreider Moore-Schreiber passed away on Friday, August 6, 2021, at Linden Village after a long battle with dementia. She was the wife of the late Richard L. Moore and the late John W. Schreiber. Born on August 28, 1924, Nancy was the daughter of the late Harry Bachman and Edith Bomberger Kreider. After obtaining her elementary education in a one-room schoolhouse along the Snitz Creek, Nancy graduated from Lebanon High School in 1941 and from Lebanon Valley College in 1945 with a degree in chemistry. She initially worked as a chemist at Eastman Kodak in Rochester, NY, before returning to Lebanon to raise her children. She then became a teacher/superintendent of the kindergarten school at Holy Trinity Lutheran Church, a teacher at South Lebanon Elementary School, a co-owner of John W. Schreiber Plumbing and Heating, a worker at Heim’s Machine Shop, and the owner of Cabin Point Stables, a horse boarding facility. Nancy had a tremendous zest for life and learning. She enjoyed planting a large garden, raising chickens, knitting afghans, assembling jigsaw puzzles, reading novels, and spending time with her family and friends. Her passion in life was riding horses. For nearly six decades she could be seen riding Suzy, Daisy, Bucky, Mirage, or Baleyna among others on the trails around Cabin Point and Mt. Gretna. One of her greatest thrills was meeting the train at the end of Black’s Cottages Lane then racing it on horseback along the railroad bed to the Colebrook Ice Dam. She always had a dog by her side (Shep, Puddles, Wolf, Honey Bun, Franny Farkle, or BB) with a particular fondness for boxers (Betsy, Xenia, Lulu, and Daisy Mae) in her later years. Surviving are sons John E. (Linda) Schreiber and Henry D. (Helen) Schreiber; daughter Susan K. (Dennis) Putt; step-son David R. (Linda) Moore; special daughter-in-law Donna E. Schreiber; grandchildren Justin Schreiber, Brett Schreiber, John Schreiber, Lea McQuinn, Terri Reagan, Kevin Putt, Kenneth Putt, Keith Putt, Andrew Schreiber, Antonio Moore, Matthew Moore, Derek Moore, and Kristin Stamm; and numerous great-grandchildren. In addition to her husbands, she was preceded in death by her son Ralph D. Schreiber, and her brother David B. Kreider. Her Celebration of Life will be private at the Schreiber Pavilion, where she hosted many birthdays and holiday picnics, featuring corn roasts, fish, fries, burgers, pinochle games, and quoits. In lieu of flowers, the family suggests memorial donations be made to one’s local animal shelter.

Nancy Kreider Moore-Schreiber passed away on Friday, August 6, 2021, at Linden Village after a long battle with dementia. She was the wife of the late Richard L. Moore and the late John W. Schreiber. Born on August 28, 1924, Nancy was the daughter... View Obituary & Service Information

The family of Nancy Moore-Schreiber created this Life Tributes page to make it easy to share your memories.

Send flowers to the Moore-Schreiber family.