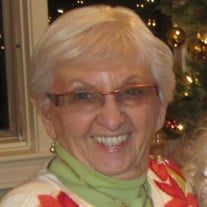 Nancy Louise Wenger Meyer Leibig of Laurinburg, NC, formerly of Annville, PA and The Villages, FL passed away on Tuesday, January 19, 2021 at Scotia Village, Laurinburg, NC. Nancy was born June 11, 1933 in Palmyra, PA to the late Herman D. and Martha K. Wenger. She is preceded in death by husbands, Harry M. Meyer and Robert Leibig. Nancy was in the 1951 graduating class of Palmyra High School. She worked at the Hershey Chocolate Company in the office and then as a secretary at Annville-Cleona High School before she retired. Harry and Nancy were fans of the Hershey Bears hockey team and had season tickets for 19 years. She was a member of Lebanon Country Club where she was an avid golfer. When she married Robert, they moved to The Villages, FL where she continued to play golf daily. Upon Bob’s death, Nancy moved to Scotia Village Continuing Care Retirement Community in Laurinburg, NC to be closer to her family. Surviving are her daughters, LuAnn K. (Dennis) Brightbill of Annville, PA and The Villages, FL, Jolene M. (Blake) Caldwell of Laurinburg, NC; sister, Mary Ann (George) Shearer of Palmyra, PA; Four grandchildren, Jodee Bert, Megan Dyer, Kellie Caldwell and Andrew Brightbill, three great grandchildren, Connor Bert, Caycee Bert, and Kira Dyer, along with several nieces and nephews. A private interment will be held at Gravel Hill Cemetery at a later date. Memorials may be given to Scotland Regional Hospice, P.O. Box 1033, Laurinburg, NC 28353 or to a charity of your choosing. Services entrusted to Richard Boles Funeral Service.

The family of Nancy Louise Leibig created this Life Tributes page to make it easy to share your memories.

Send flowers to the Leibig family.