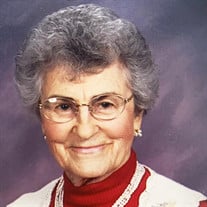 Mary Elizabeth (Newcomer) Eshleman, age 97, resident of Londonderry Village, departed this life to her Heavenly Home on February 3. She was married for 72 years to her beloved husband, C. Raymond Eshleman until his death on April 4, 2018. Before Londonderry Village, they were longtime residents of Cleona, PA. Born Jan. 3, 1925 in Mount Joy, she was the daughter of the late Martin and Lillian Mumma Newcomer. Graduate of Mount Joy High School 1942. She was a stay-at-home Mom and later she served as Executive Secretary in the President’s office at Lebanon Valley College until her retirement. A member of Fairland Brethren in Christ Church for many years, she was active in the Children’s Ministries most of her adult life; served on the prayer pal youth ministry and was the leader of the Prayer Chain Ministry. She served with her husband as a Stephen Minister and as a Deacon team for a term. After retirement, she and her husband enjoyed two months of the winters in Florida and met many new friends. She enjoyed serving on many volunteer projects under the RSVP program. Surviving are sons, Donald, (Fay), Stone Mountain, GA; Dennis, (Deirdre), Tubac, AZ; David (Cindy), Jonestown, PA; grandchildren, Luke Eshleman (Kimberly), Katie Penica (Brian), Michael Eshleman (Lis) and John Eshleman; great grandchildren: Brody, Quinn and Graham Eshleman; step granddaughter Francia Lewis (Tennessee) and two step great granddaughters Amelia and Gracie Wilson. Preceding in death are an infant son; and sisters, Arlene Newcomer, Anna Enck and Martha Harnish. Funeral services will be held on Saturday, February 12th at 11:00AM at Fairland Brethren in Christ Church, 529 W. Penn Avenue, Cleona, PA 17042. Interment will be held at the convenience of the family in Erisman Mennonite Cemetery, Manheim. A viewing will be held at Fairland from 10AM until the time of her service at the church. Contributions may be made to Fairland Brethren in Christ Church or the Londonderry Village Caring Fund, 1200 Grubb Road, Palmyra PA 17078.

Mary Elizabeth (Newcomer) Eshleman, age 97, resident of Londonderry Village, departed this life to her Heavenly Home on February 3. She was married for 72 years to her beloved husband, C. Raymond Eshleman until his death on April 4, 2018.... View Obituary & Service Information

The family of Mary Elizabeth (Newcomer) Eshleman created this Life Tributes page to make it easy to share your memories.