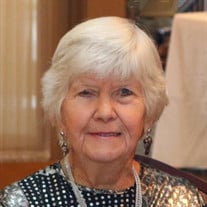 Mary E. Wolfe, 95, of Palmyra, passed away on May 18, 2021, at her daughter’s home. She was the wife of the late Russell H. Wolfe, who passed away in 2008. Mary was born in Lebanon on October 16, 1925, to the late Pierce and Nora (Snyder) Edris. She graduated from Lebanon High School in 1942 and attended the Parsons School of Design in New York City. In 1965 she and her husband started their family business, Wolfe’s Rental Company (now, Wolfe’s Rental and Storage Company) in Reading, Pa., where she worked until the age of 90. She was an active member of the Lebanon Church of the Brethren from birth until age 91. She joined the Palmyra Church of the Brethren soon after her move to Londonderry Village in Palmyra. While in their 20’s, Mary and her husband “Buss” built their first home themselves, and that was the start of her love for designing and building three more homes and their business. Together they enjoyed traveling in their RV with family and friends, using it locally and throughout the U.S. Parties at their back yard swimming pool were a real joy for them. Mary and her husband were part of a pinochle card club for many years, and she continued playing with several card groups at “the Village,” including learning to play Bridge at age 91. Surviving are her daughter, Sue E. Collins and her husband Russell of Palmyra; a son Steven A. Wolfe and his wife Vicki of Lebanon; a daughter-in-law Janet L. Wolfe of Tennessee; 8 grandsons, Michael and Peter Collins, and Todd, Jeremey, Matthew, Alex, Casey, and Zachary Wolfe and their families, including 14 great grandchildren, and 4 great great grandchildren. She was preceded in death by her son, Rev. David E. Wolfe, and her siblings, Ruth Marschalk, Naomi England, and John Edris. A memorial service will be held on Sunday, June 27, 2021, at 3 p.m. at Palmyra Church of the Brethren, 45 N. Chestnut Street, Palmyra. In lieu of flowers, memorial contributions may be made to the Caring Cupboard Food Bank, 131 N. Railroad St., Palmyra, PA (online at caringcupboard.org/givemoney).

The family of Mary E. Wolfe created this Life Tributes page to make it easy to share your memories.

Send flowers to the Wolfe family.