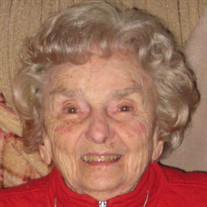 Louise K. Koons, 100, of Lebanon, passed away on Friday, January 29, 2021 at The Lebanon Valley Home. She was the wife of the late, Frederick D. Koons, who passed away in 2006. Louise and Fred met in Lebanon High School in the school musical "Sweethearts", were married on June 17, 1939, and celebrated 67 years of marriage. Louise was born in Lebanon on March 9, 1920 to the late George F. and Katharine B. (Boyer) Krause and was the youngest of their six children. Louise was a 50+ year member of 4th Street Presbyterian Church/St. Andrews Presbyterian Church, and was active with her husband in church activities. She taught Sunday School and Bible School, assisted with the Boost class, helped with church meals, and was a member of the 60 Plus group. Louise was the rock of the family, a full time homemaker, and a full time mother to her three daughters. She was a "kid magnet". They gravitated to her, appreciating her humor and interest in them. Because she was such a good conversationalist and a super listener, she had a busy telephone contact group of friends and family who called her regularly. Louise was very active throughout her entire life, walking almost everywhere she needed to go, walking her dogs, riding tandem bicycle with her husband and daughters, and swimming laps in her pool up to the age of 94. Louise also assisted Fred when he was Supervisor of the Lebanon City Census during summers for many years, walking for miles to collect information. Louise was very interested in the news and politics. She worked the polls during local elections, and voted regularly, including the most recent election. Louise was smart and sharp as a tack and had a remarkable memory. Her family called her the unofficial historian of Lebanon County. She had a wonderful sense of humor. Even though she was so involved with so much in her life, her family was always the most important part of her life. Surviving are her daughters, Katharine Erdman and husband James "Jim" of Mt. Gretna, Mina Hankins and husband James "Jimmy" of Virginia, Fredrica "Fritzi" Bair and her husband Rick of Palmyra, grandchildren, Kirsten, Jimmy, and Daniel, and a great grandson, Jack. In addition to her husband, Louise was preceded in death by her siblings, George, Andrew, Katharine Jane, Elamina, and Sally. Louise is also survived by many nieces and nephews, the very best neighbors ever, and friends of all ages who visited, called, and supported her until her passing. She truly cared about and for those whom she loved. The family wants to acknowledge the excellent care provided by the WellSpan Hospital staff in December 2019, and the loving care by The Lebanon Valley Home during the past year. Louise would also want to thank her home care helpers from Seniors Helping Seniors who assisted her before her illness. A special gratitude to her wonderful neighbors whose assistance, love, and special attention helped Louise to remain in her home for so many years. Louise and Fred were a great team who loved their girls, their husbands, and grandchildren as much as they were adored by them. Louise taught them her philosophy of the Golden Rule, and also her most enduring words - I do it "My Way." Services will be private. In lieu of flowers, contributions can be made to the Frederick D. and Louise K Koons Scholarship to provide support to a graduating senior of Lebanon High School, Lebanon, PA, who has been accepted to Lebanon Valley College and plans to major in education. Lebanon Valley College c/o Danielle Vigilante Webb, Director of Advancement Operations 101 N. College Ave. Annville, PA 17003-1400

Louise K. Koons, 100, of Lebanon, passed away on Friday, January 29, 2021 at The Lebanon Valley Home. She was the wife of the late, Frederick D. Koons, who passed away in 2006. Louise and Fred met in Lebanon High School in the school musical... View Obituary & Service Information

The family of Louise K. Koons created this Life Tributes page to make it easy to share your memories.

Send flowers to the Koons family.