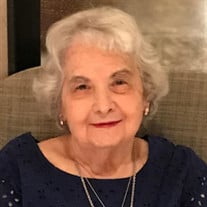 Lorraine Kreider Patton passed away peacefully of natural causes in Maryland on Tuesday, December 7th. Lorraine was born on November 13, 1931 and was the daughter of the late Sara and Herman Kreider. Lorraine graduated from Millersville College and taught fourth grade in her early years in Lebanon County. She was married for 62 years to her beloved, the late George E. Patton, Jr. Lorraine was active in the Lebanon community at St. Marks Church of Christ, Red Hats, Harmonia Club, Lebanon Community Theater, and other organizations. She was the President of the Lebanon Builders Association until her retirement. Family was most important to Lorraine. She was a daughter, mother, wife, grandmother, and great-grandmother and was affectionally called Moose by all who loved and knew her. She was preceded in death by her husband George, her grandson David Snyder, and her brother and sister-in-law Lloyd and Blanche Kreider. She is survived by her two loving daughters, Kay Snyder and Anita O’Connor and their husbands Larry Snyder and Maurie O’Connor. She had four cherished grandchildren, David Snyder, Philip Snyder, husband of Maddie Bray Snyder, Sarah O’Connor and Hayley O’Connor. She also had a handsome great grandchild, Griffin Snyder. Funeral Services for Lorraine will be held at 10:00AM on Monday, December 20, 2021, at Kreamer Funeral Home and Crematory, Inc., 618 E. Main St. Annville, PA 17003. A public visitation will be held at the Funeral Home on Monday from 9:00AM-10:00AM. Interment will take place at Cornwall Cemetery. In lieu of flowers, Lorraine would like you to give a donation to your favorite charity.

Lorraine Kreider Patton passed away peacefully of natural causes in Maryland on Tuesday, December 7th. Lorraine was born on November 13, 1931 and was the daughter of the late Sara and Herman Kreider. Lorraine graduated from Millersville College... View Obituary & Service Information

The family of Lorraine Kreider Patton created this Life Tributes page to make it easy to share your memories.

Send flowers to the Patton family.