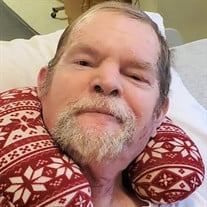 Lonald D. “Lonnie” Hoover, 64, of Cedar Haven and formerly of Jonestown, passed away on Wednesday, June 9, 2021, at Cedar Haven, Born in Lebanon on July 3, 1956, he was the son of the late Henry A. and Janet M. Hoffa Hoover. Lonnie graduated in 1974 from Northern Lebanon High School, where he was a star athlete. He set the long jump record for Northern Lebanon in 1974. His record still stands after 48 years. Following graduation, he worked for Jones Motor Freight in Lebanon. In 1979, he was involved in a serious accident that left him totally dependent on his parents for his care. They lovingly cared for him for many years. He became a resident of Cedar Haven after their deaths. He is survived by his brother Mitchell H.A. Hoover of East Fillmore, IN, and several nieces and nephews. He was preceded in death by his sister Jelena G. Derr. Over the years of his stay at Cedar Haven, the staff, along with many of the residents, became his family and friends. He was very close to them, and he cared deeply for them. A close friend, Marie, shares the following memories: “When people would meet Lonnie, they would be attracted to him. There was something very special about him. It could have been his caring personality, thankfulness, appreciation, or his good sense of humor. He had such a big smile. I know the above qualities, along with his physical condition, amazed people. Put them all together, made him a great man. I met Lonnie in 1975. God blessed me. His terrible accident happened in 1979, when his parents took him home to care for him. I lived my own life, always wondering how he was doing. When I found out he was at Cedar Haven, I became a constant and important part of his life. Lonnie loved his game show channel on TV, his many, many DVDs, and bingo. Most of all, he played a mean game of dominos. He was hard to beat and very serious. We played for hours, talked, laughed, and he would drink his iced coffee. Lonnie, for sure, will be missed by a lot of people and for sure my personal family. Most of all, Lonnie became a true, caring friend to me. I’ll miss all of our talks and laughs and that smile! All the realities of life made him truly my best friend. The years spent with Lonnie are a blessing. I sure will miss you Lonnie, and I love you!” Marie.

The family of Lonald D. "Lonnie" Hoover created this Life Tributes page to make it easy to share your memories.

Send flowers to the Hoover family.