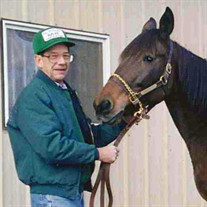 Leon J. Kauffman, 91, of Lebanon died Wednesday, June 9, 2021, at Cornwall Manor. He was preceded in death by his wife of 62 years, Pauline E. Rittle Kauffman. Born in North Lebanon Township on March 17, 1930, he was the son of the late William H. Kauffman and the late Florence A. Klick Kauffman. Leon had a passion for his career in the animal feed industry beginning at Whitmoyer Laboratories in the early 1950’s. He rose to the position of general manager of the Barker, Moore & Mein division of Whitmoyer before striking out on his own by founding Kauffman’s Animal Health, Inc., in 1978. He continued to play a role at the company into his later years and took great pleasure in its success. An outgrowth of his career in animal feed was his passion for horse racing both thoroughbred and harness, and he maintained an active membership in the United States Trotting Association until his death. He was a faithful member at St. Jacob’s Kimmerlings Church, where he served on the Board for over 50 years. He was a member of Masonic Lodge #704, the Harrisburg Consistory, American Legion Post #158, and a Veteran of the U.S. Army. Surviving is a daughter Debra E. Kauffman, wife of Howard Horst of Nokomis, FL, two sons David W., husband of Deborah Kauffman, and Thomas P., husband of Tracy Kauffman, both of Lebanon, seven grandchildren, Lauren Horst, wife of Matthew Becker, Courtney Horst, Kelsy Kauffman, Ryan Kauffman, Mariah Kime, wife of Tyler Kime, Taylor Kauffman, Jenah Kauffman, and one great-granddaughter, Aria Becker. He is preceded in death by two sisters, Margaret A. Heberling, Miriam J. Bean, and two brothers, Harold W. Kauffman and Leroy F. Kauffman. A memorial service will be held at 10:30AM on Saturday, June 19, 2021, at St. Jacob’s Kimmerlings Church, 1 St. Jacob’s Drive Lebanon, PA 17046. A visitation will be held prior to the service from 10:00AM-10:30AM. Inurnment will be held at St. Jacob’s Kimmerlings Cemetery. In lieu of flowers, contributions can be made to St. Jacob’s Kimmerlings Church, or the Lebanon County Christian Ministries, 250 S. 7th Street Lebanon, PA 17042 in his memory.

Leon J. Kauffman, 91, of Lebanon died Wednesday, June 9, 2021, at Cornwall Manor. He was preceded in death by his wife of 62 years, Pauline E. Rittle Kauffman. Born in North Lebanon Township on March 17, 1930, he was the son of the late William... View Obituary & Service Information

The family of Leon J. Kauffman created this Life Tributes page to make it easy to share your memories.

Send flowers to the Kauffman family.