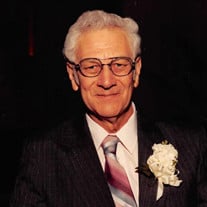 Kenneth I. Buffenmeyer, 90, of Annville died Wednesday, January 13, 2021 at his residence. He was the husband of Lillie I. Hitz Buffenmeyer with whom he would have celebrated 31 years of marriage this February. His first wife, Mary J. Hostetter Buffenmeyer whom he was married to for 37 years preceded him in death in 1988. Born in Lebanon on July 14, 1930, he was the son of the late Irwin and Esther Kiscadden Buffenmeyer. He retired as a carpenter from the Reading Railroad. Ken was a 1948 graduate of Lebanon High School, a member of the North Annville Bible Church where he played his guitar. He was a member of the Western Caravan Band who played on WLBR and at local carnivals. He was a member of the National Rifle Association, enjoyed camping and hunting, and was a loving husband, father, grandfather, and great grandfather. Surviving are three sons Larry A. husband of Brenda K. Martin Buffenmeyer of Annville, Bruce A. husband of Jackie R. Blauch Buffenmeyer of Annville, Douglas I. husband of Beverly J. Hummer Buffenmeyer of Annville, four daughters Debra J. wife of Ronald K. Burkholder of Hershey, Cindy M. wife of Wayne R. Tshudy of Annville, Bonnie L. wife of Dennis M. Rhoad of Annville, Lori A. wife of Scott A. Weik of Lock Haven, a step-son Robert E. husband of Doreen Dissinger of Schaefferstown, three step-daughters Barbara K. wife of Marty Moses of Lebanon, Debra F. wife of Bryon Stumpf of Lebanon, Robin M. wife of Bryan Rueppel of Lebanon, 27 grandchildren, several great grandchildren, 2 great great grandchildren, and a sister Shirley wife of the late Lester Witmer of Lebanon. He was preceded in death by a brother James Buffenmeyer. Funeral services will be held on Monday at 11:00 AM at the North Annville Bible Church, 4590 Hill Church Road, Annville, PA 17003. Interment will be held at North Bellegrove Cemetery. A viewing will be held on Monday from 10-11 AM prior to the service. Contributions may be made to the North Annville Bible Church Guatemala Missions Fund in his memory and sent to the Church. Kreamer Funeral Home and Crematory, Annville is in charge of arrangements.

Kenneth I. Buffenmeyer, 90, of Annville died Wednesday, January 13, 2021 at his residence. He was the husband of Lillie I. Hitz Buffenmeyer with whom he would have celebrated 31 years of marriage this February. His first wife, Mary J. Hostetter... View Obituary & Service Information

The family of Kenneth I. Buffenmeyer created this Life Tributes page to make it easy to share your memories.

Send flowers to the Buffenmeyer family.