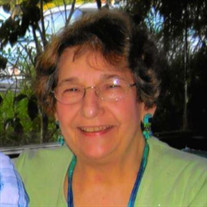 Justine Julia Kreifels, 79, of Annville, Pennsylvania passed away January 9, 2021. She was the wife of the late John B. Kreifels. Born on July 6, 1941 in Harrisburg, Pennsylvania to her late parents Pauline and Adam Schmidt, she graduated from Bishop McDevitt High School in 1959, and from St. Joseph’s Hospital School of Nursing in 1962. Justine and John were united in marriage in Berlin, Germany on April 15, 1967 and were married for 51 years. She achieved Certification in Hospice and Palliative Care Nursing after furthering her education at Lebanon Valley College. Justine was an RN at Holy Spirit Hospital in Harrisburg and Good Samaritan Hospital in Lebanon before retiring from nursing from Pinnacle Home Health and Hospice. In her retirement, Justine pursued her passion for art and watercolor, travel, time with family and friends and her garden. She was a member of Hershey Art Association, Harrisburg Scottish Country Dance Society, Harrisburg Community Theatre, and St. Paul the Apostle Roman Catholic Church. She also volunteered at bereavement retreats for cancer survivors and at the Annville Free Library. Surviving is daughter Brigitte Kreifels Jones and husband J. Price Jones, and grandsons Ian and Ramsey Jones of Atlanta, son John Justin Kreifels and granddaughter Morgan Kreifels of Lebanon; sisters Pauline C. Schmidt and Mary Ann Guerrisi; many nieces and nephews and extended family. Mass of Christian Burial will be held on Thursday, January 28th at 10:30 AM at St. Paul the Apostle Church, 125 S Spruce Street, Annville, PA 17003. Burial will be in Holy Cross Cemetery, Harrisburg. A celebration of life will be scheduled at a later date. In lieu of flowers, contributions may be made to St. Paul the Apostle Church or the Annville Free Library, 216 E Main Street, Annville, PA 17003.

Justine Julia Kreifels, 79, of Annville, Pennsylvania passed away January 9, 2021. She was the wife of the late John B. Kreifels. Born on July 6, 1941 in Harrisburg, Pennsylvania to her late parents Pauline and Adam Schmidt, she graduated... View Obituary & Service Information

The family of Justine Julia Kreifels created this Life Tributes page to make it easy to share your memories.

Send flowers to the Kreifels family.