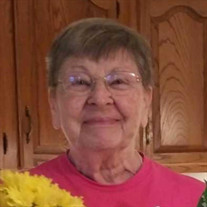 June H. Grimes, 88, of Palmyra, passed away on Sunday, November 28, 2021, at her residence. She was the wife of the late Richard G. Grimes, who passed away in 2018. June was born in Mt. Zion, Lebanon County on July 21, 1933, to the late Earl S. and Grace (Yiengst) Hoffa. She was a member of Salem UCC in Campbelltown. June was a choir director for over 50 years at multiple churches, and a travel agent for more than 4 decades. She continually planned bus trips and tours to various venues, most recently for Londonderry Village residents. She was a 4-H leader and a member of the Iona Club. In addition, she was the first member of the Fredericksburg High School Band to be selected for state band. After high school graduation, she attended Traphagen School of Fashion in New York City, where she also worked as a nanny. After getting married, June followed her husband to Honolulu, Hawaii where he was stationed with the U.S. Navy. Later, she and her husband continued traveling the world, exploring many different cultures. Surviving are her children, Lori G. Roehl and her husband Allen of Seattle, WA, Brad S. Grimes and his wife Desiree Dishong of Lebanon, grandchildren, Jessie Ginetto, Rachael Melman, Luke Roehl, Alicia Southers, Cassandra Grimes, great grandchildren, Kaia, Sonya, Sophia, and Alaina, and a brother Glenn G. Hoffa and wife Marilyn of Hershey. A memorial service will be held on Saturday December 18, 2021, at 2:00PM at Salem United Church of Christ, 2761 Horseshoe Pike, Campbelltown, PA. There will be a prior visitation from 1:00PM to 2:00PM. Private interment will be at Indiantown Gap National Cemetery, Annville. In lieu of flowers, contributions can be made to the American Cancer Society, PO Box 22478 Oklahoma City, OK 73123 in her memory.

The family of June H. Grimes created this Life Tributes page to make it easy to share your memories.

Send flowers to the Grimes family.