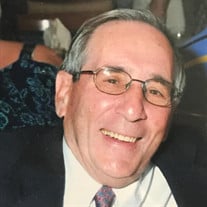 Joseph F. Hartman, 84, of Lebanon, passed away on Saturday, January 16, 2021, at his home. He was the husband of Mary Ann Gray Hartman. On November 9th, they celebrated their 63rd wedding anniversary. Born in Lebanon on January 28, 1936, he was the son of the late Phillip J. and Edna Summy Hartman. He retired from GE, where he had been a tack welder. While he was a student at South Lebanon High, he was involved in soccer and was their champion pole vaulter; he held the record for many years. Joe was an avid golfer at Blue Mountain, and he had four holes-in-one. He played softball for S. Lebanon and for Prescott. He loved the beach and swimming, traveling with his wife, and he especially enjoyed playing video games with his grandchildren. In addition to his wife, he is survived by his daughters Sherrie L. wife of John Demmy, Jr., of Lebanon, Ruth E. wife of David Torres of Lake Wynonah, Carol A. wife of Robert Demmy of Lebanon, Kathy J. Hartman and her companion Al Bucks of Myerstown, and Stacy L. wife of David Shulze of Downingtown; brother George Hartman of Jonestown; seven grandchildren; and thirteen great grandchildren. He was preceded in death by his granddaughter Janessa E. Torres and brothers Ericus, Phillip and Edward Hartman. A memorial service will be held on Thursday, January 21, 2021, at 10:30 a.m. at the Kreamer & Lum Funeral Home & Crematory, Rt. 72 & Camp Meeting Rd., Jonestown. A visitation will be one hour to the service. Interment with military honors will follow at Indiantown Gap National Cemetery. In lieu of flowers, memorial contributions may be made to the American Heart Association, 4250 Crums Mill Rd., Suite 100, Harrisburg, PA 17112.

Joseph F. Hartman, 84, of Lebanon, passed away on Saturday, January 16, 2021, at his home. He was the husband of Mary Ann Gray Hartman. On November 9th, they celebrated their 63rd wedding anniversary. Born in Lebanon on January 28, 1936,... View Obituary & Service Information

The family of Joseph F. Hartman created this Life Tributes page to make it easy to share your memories.

Joseph F. Hartman, 84, of Lebanon, passed away on Saturday, January...

Send flowers to the Hartman family.