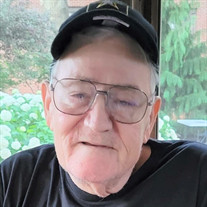 Johnnie D. Beaver, Sr., 72, of Jonestown, passed away on Friday, September 10, 2021, at WellSpan Good Samaritan Hospital, Lebanon. He was the husband of Sandra M. Stevens Beaver. On June 26th, they celebrated their 50th wedding anniversary. Born in Clearfield on March 28, 1949, he was the son of the late Charles M. and Beverly J. Milligan Beaver. He served in the U.S. Army in Korea during the Vietnam Conflict Era. He also served in the U.S. Army National Guard in Desert Storm with the 121st Transportation Company. In 1972 he became the Ranger at Camp Bashore Scout Reservation until 1979. He then worked for the PA Turnpike and owned and operated Beaver’s Body Shop in Jonestown. He juggled his time working for Tudor Grill in Hershey Park and South Lebanon Township School Police. He loved the outdoors and especially hunting and fishing. He loved John Wayne and Clint Eastwood movies and watching the Chicago Bears football team play. He enjoyed playing cards with friends and grandchildren, and video games too. He loved to tinker and fix anything. He also loved old cars and especially his 1965 Chevelle. He was known as Mr. Fix-it and was always willing to help anyone! In addition to his wife, he is survived by his son Johnnie D. “Duke” Beaver, Jr., and his wife Rachel of Lebanon; daughters Bonnie J. Beaver of Lebanon and Megan M. wife of Brandon Beaver, Sr., of Lebanon; brothers Harry husband of Cheryl Beaver of FL and Charles husband of Tina Beaver of CO; grandchildren Kyle Beaver, Jéan Foesig, Robbie Foesig, Brandon Beaver, Jr., Mariska Beaver, Rhiannon Norman, Rebekkah Beaver, Johnnie Beaver III, Jeremiah Beaver, and Joshua Beaver; as well as many nieces and nephews. He was preceded in death by his brother Phillip (Donna) Beaver. Funeral services will be held at 11:00 a.m. on Tuesday, September 21, 2021, at Kreamer & Lum Funeral Home & Crematory, Rt. 72 & Camp Meeting Rd., Jonestown. A viewing will be held one hour prior to the service. Interment will follow at Indiantown Gap National Cemetery.

The family of Johnnie D. Beaver, Sr. created this Life Tributes page to make it easy to share your memories.