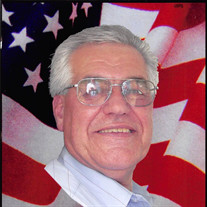 John Barry “Bop” Landis, 80, passed away at his residence on Wednesday December 1, 2021. He was the husband of the late Bernice M. (Summers) Landis, who passed away in 2014. John was born in N. Annville Twp. on April 27, 1941 to the late John W. and Dorothy Mae (Feazer) Landis. He was a 1959 Annville High School graduate. John was a US Army Vietnam War veteran. He had been a US Mail Carrier for 35 years for the Hershey Post Office, and after retirement he worked for Manheim Auto Auction. He was a member of the Evangelical Free Church of Hershey, where he was head usher. In his younger days, he enjoyed fishing. He was a car man; he had owned and traded 40-50 cars over his lifetime. He most recently had his Corvette. John was a family man, his children, grandchildren, and great grandchildren meant the world to him. He loved his late wife dearly. John and Bernice were always together, and they loved to travel, especially traveling to Nashville for 15 years. Surviving are his children, Scott C. Wagner (Debra) of Palmyra, Lori L. Wagner (Tim) of Palmyra, grandchildren, Averee Conway (Steve), Aimee Bergner (Tim), Andrew Wagner (Yasied), great grandchildren, Oliver, Charlotte, Yainelis, David, Lenore, and Laynce, and his sister Audrey Shuey (Kenneth) of Jonestown. He was preceded in death by his siblings, Warren James “Jim” Landis, Karl C. Landis, Randy Landis, Kathryn “Toddy” Grubb, and Phyllis Himmelberger. A funeral service will be held on Tuesday, December 7, 2021 at 11AM at Kreamer Funeral Home and Crematory Inc. 618 E. Main Street, Annville. Interment will be in Spring Creek Cemetery, Hershey. There will be a visitation from 10AM until 11AM at the funeral home. In lieu of flowers, contributions may be made to Hershey Evangelical Free Church, 330 Hilltop Road, Hummelstown, PA 17036 in his memory.

The family of John Barry "Bop" Landis created this Life Tributes page to make it easy to share your memories.

Send flowers to the Landis family.