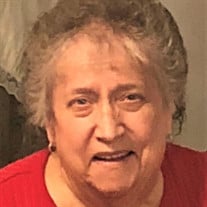 Joann E. Behney, 76, of Myerstown, passed away on Thursday, January 14, 2021, surrounded by her loving family at her daughter’s home. She was the wife of the late Guy A. Behney who died in 1986. Born in Bethel Township, Berks County on December 18, 1944, she was the daughter of the late George W. and Louella M. (Fidler) Sheidy. She was a homemaker most of her life. Other jobs that she held were babysitting many children, preparing food for Elsie Burger Catering, waitressing at Frystown Social Hall and Farmer’s Wife Restaurant. She was a member of St. Paul’s United Church of Christ of Hamlin, where she was involved with many church activities, including the ladies aid group. Joann was a member of the Blue Mountain 50+ Club and a lifetime member of the Kittatinny Hunting & Fishing Club. Joann’s enjoyments were listening to gospel music and going to gospel concerts, sending cards, going to bingo, talking on the telephone, and doing word search books. She looked forward to going on Labor Day weekend to the church shore retreat. Most of all, she enjoyed spending time with her family & friends. She was called “Mom” and “Grandma” to many. She is survived by her children Ricky L. husband of Wendy Behney of Richland, Rodney L. husband of Trina Behney of Lebanon, Rochelle L. wife of Terry Schucker of Myerstown, Rory L. Behney and fiancé Lonna McCartney of Myerstown, Rhonda L. wife of Jonathan Olesh, Jr. of Fredericksburg, and Renee L. Smith and companion Ronald Weidman of Myerstown; 17 grandchildren and 20 great grandchildren; and sister Dorothy M. Sheidy of Myerstown. She was preceded in death by her son Randy L. Behney on August 5, 2020, daughter-in-law Lori A. Behney, and son-in-law Larry G. Smith. There will be a viewing on Tuesday evening from 6:00-8:00 p.m. at the funeral home. Funeral services will be held on Wednesday, January 20, 2021, at 11:00 a.m. with a viewing one hour prior to the service at the Kreamer & Lum Funeral Home & Crematory, Rt. 72 & Camp Meeting Rd., Jonestown. Interment will be at the Hamlin Cemetery, Hamlin. In lieu of flowers, contributions may be made to St. Paul’s United Church of Christ, P.O. Box 417, Fredericksburg, PA 17026.

Joann E. Behney, 76, of Myerstown, passed away on Thursday, January 14, 2021, surrounded by her loving family at her daughter&#8217;s home. She was the wife of the late Guy A. Behney who died in 1986. Born in Bethel Township, Berks County... View Obituary & Service Information

The family of Joann E. Behney created this Life Tributes page to make it easy to share your memories.

Joann E. Behney, 76, of Myerstown, passed away on Thursday, January...

Send flowers to the Behney family.