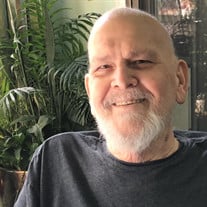 James R. “Jim” Deimler, 77, of Lebanon, died Monday, January 18, 2021 at his residence. He was the husband of Daniel O. Snyder. Born in Annville on December 5, 1943, he was the son of the late Herman and Martha (Shell) Deimler. Following the passing of his father Herman, along with his mother, Jim was raised by John Vonada. Jim graduated from Annville-Cleona High School with the class of 1961. He went on to own and operate his Hair Styling business, Talk of the Town, for over 52 years. He was involved with the Miss America pageant for over 50 years, and was a former hairstylist for Miss Pennsylvania. Jim was a big fan of Lebanon Catholic Basketball, and enjoyed gardening, cooking and decorating. He will be missed by many. Surviving in addition to his husband is a son Dustin Deimler, husband of Sheri of Lebanon, and grandchildren Bradley Deimler, Alaina Kline and Kira Kline. He was preceded in death by a son Eric Deimler, brother Ken Deimler and sister Carol Williams. Due to COVID-19, a memorial service will be held at a later date. In lieu of flowers, contributions may be made in Jim’s memory to WellSpan Sechler Family Cancer Center 844 Tuck Street, Lebanon, PA 17042 or to AseraCare Hospice (an Amedisys Company): Make check payable to Amedisys Foundation 3854 American Way, Suite A Baton Rouge, LA 70816. www.amedisys.com/about/foundation

The family of James R. "Jim" Deimler created this Life Tributes page to make it easy to share your memories.

Send flowers to the Deimler family.