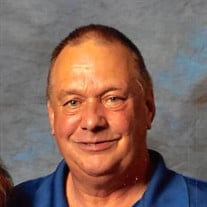 James A. “Jim” West, Lebanon, PA passed away Monday, September 27, 2021 at the Hershey Medical Center. Jim was born June 23, 1955 in Lebanon, PA and he and his twin sister Judy were adopted as babies by the late Clarence A. West and Virginia (Miller) West. He retired last June from Bell and Evans, Fredericksburg, PA. He graduated from Northern Lebanon High School 1973 where he played basketball, baseball, and loved being a class clown which came naturally. In addition to his parents, he is preceded in death by his wife Karen West, his siblings Henry West, Eddie West, John West, Donald West, and foster brother Walter Gundrum. Jim is survived by his twin sister Judy Conley and husband John of Fancy Gap,, VA, son Jason West and wife Janice of Fairfield, CA, stepsons - Bill Wargo and wife Monica of West Chester, PA and Scott Wargo and significant other Jamie of Freeland, MI. Also dear and faithful family friend Missi Carruthers who was like a daughter to Jimmy and Karen. Three granddaughters and two step granddaughters. Two nieces Jessica (Garman) Houser and Tonya (Garman) Perry who have wonderful funny memories of their Uncle Jimmy- with a Pennsylvania Dutch accent to emphasize "Jimmy". They still remember Uncle Jimmy taking them to the Hershey Bear hockey games. Nephews Brian and DL West who lived out of state but were entertained by Uncle Jimmy when they would come to visit. (That's because mama always said his mouth went like a duck's behind.) He was quite the social butterfly you know. Surviving also are numerous nieces and nephews from foster brother and great nieces and nephews. His sister Judy has precious memories of them growing up on a dairy farm, playing Army, cowboy and Indians, baseball, ice skating on the farm pond, shooting baskets, working hard on the farm and never arguing, just real buddies. As adults they enjoyed golfing together. He had a passion for NASCAR as well. Actually, he was an all around sports jock from football to tennis. AND believe it or not a side of Jimmy that you didn't know - he enjoyed classical music!! He is loved by many and will be greatly missed. Five weeks before passing away he recommitted his life to the Lord. You can go to his sister's Facebook page - Judy Estes Conley and see him singing, I'll Fly Away.

The family of James A. "Jim" West created this Life Tributes page to make it easy to share your memories.

Send flowers to the West family.