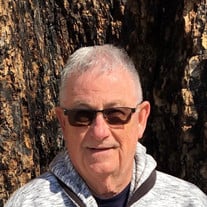 Irvin Thomas “Tom” Kline, 76, of Annville passed away on Tuesday April 6, 2021 at M.S. Hershey Medical Center. Tom was born in Lebanon on August 14, 1944 to the late Irvin Iceman and June (Funk) Kline. He was a Schaefferstown High School graduate. He was employed through Sowers Printing from 1965-1968, Lebanon Valley Offset from 1968-1995, when they closed their business, and retired from Byler Offset Printing in 2008 as a printer. Everyone knows that Tom Kline loved his life and lived it to the fullest. He was a proper outdoorsman with a love for daily walks around Middle Creek and Memorial Lake. He has hundreds of wildlife pictures in his collection, his favorite to photograph were birds like the kingfisher and bald eagle. Along with his wildlife photography, he loved collecting baseball cards; his favorite team was the Phillies. Ken Griffey Jr. was his favorite baseball player of all time. He loved to auction and collect antiques with Margaret. He loved bus trips with his friends and traveling to new places. Taking road trips in his Toyota Matrix with his loved ones while playing his favorite classic rock CDs was his favorite past-time. Among his favorite people to hang out with were his “Old Farts” who would meet at McDonalds many mornings throughout the week. He had many people he loved in his life and many people that loved him. Surviving are his children, Gregory T. Kline of Annville, Kirsten Van Demark and her husband Thom of Myrtle Beach, SC, grandchildren, S. Sgt. Daultyn R. Kline and his wife Nicole currently stationed at Ramstein Air Base in Germany, Rhiannon J. Van Demark, Abby M. Kline, Charles T. “Chad” Van Demark II, one great grandchild on the way of Daultyn and Nicole, and a sister Shirley Horst and her husband Karl of Camp Hill. He is also survived by his significant other “His Rock” Margaret Hollenbach and her children. He was preceded in death by his son, Bradley S. Kline and a sister, Joan Marie Kline. A funeral service will be held on Saturday, April 10, 2021 at 9:30AM from Kreamer Funeral Home and Crematory Inc., 618 E. Main Street, Annville. Interment will be in Grand View Memorial Park, Lebanon. There will be a viewing from 8:30AM – 9:30AM at the funeral home.

The family of Irvin Thomas "Tom" Kline created this Life Tributes page to make it easy to share your memories.

Irvin Thomas “Tom” Kline, 76, of Annville passed away on Tuesday...

Send flowers to the Kline family.