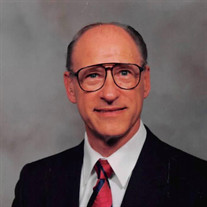 Ira R. Shoop, 87, of Elizabethtown, passed away on Sunday August 29, 2021 at his residence. He was the husband of Eva L. (Rohrer) Shoop, with whom he celebrated 67 years in marriage. Ira was born in Washington DC on October 19, 1933 to the late Ira S. Shoop and Mary K. (Snyder) Zartman. Ira was a graduate of Mount Joy High School class of 1951. He was a U.S. Army veteran of the Korean War, where he served in the 653 Observation Battalion as a surveyor for artillery positions. In his final 13 months he was transferred to special service. He was an active and faithful member of the Lutheran Church. He had worked for Raymark in Manheim, PA in the Process Engineering Dept. prior to entering Real Estate. Ira retired in 1996 as an associate RE broker, auctioneer, and certified appraiser. He was past president of Hershey-Palmyra Sertoma Club, where he was also a life-member. He was also on the National Board of Realtors, State Board of Realtors, Greater Harrisburg Board of Realtors, Lebanon County Board of Realtors, National Association of Auctioneers, United Commercials Travelers, and past senior counselor, and Susquehock power squadron. He enjoyed hunting, fishing, archery, and traveling with his family. Surviving in addition to his wife are his children, Douglas J. Shoop of Annville, Deborah L. Hoffer and her husband William of Hershey, and a grandson, Shawn R. Swanger and his wife Alicia. He was preceded in death by his grandson, Michael S. Swanger, and a half brother, Robert L. Zartman. A funeral service will be held on Thursday, September 2, 2021 at 1:30PM from Kreamer Funeral Home and Crematory Inc., 618 E. Main Street, Annville. Interment will be in Grand View Memorial Park Mausoleum with military honors. There will be a viewing from 12:30PM – 1:30PM at the funeral home. In lieu of flowers, contributions can be made to his church, Holy Trinity Lutheran Church, 212 Cocoa Ave, Hershey, PA 17033.

Ira R. Shoop, 87, of Elizabethtown, passed away on Sunday August 29, 2021 at his residence. He was the husband of Eva L. (Rohrer) Shoop, with whom he celebrated 67 years in marriage. Ira was born in Washington DC on October 19, 1933 to the late... View Obituary & Service Information

The family of Ira R. Shoop created this Life Tributes page to make it easy to share your memories.

Ira R. Shoop, 87, of Elizabethtown, passed away on Sunday August...

Send flowers to the Shoop family.