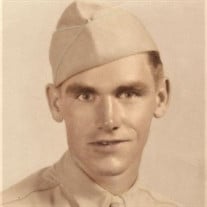 Howard Firestine, 101, of Pine Grove, formerly of Myerstown and Lewistown, passed away peacefully on December 21, 2021. He was preceded in death by his wife Betty J. Firestine, whom he married on April 28, 1943. Born in Lebanon County on June 19, 1920, he was the son of the late Harvey B. and Mary E. Firestine. Howard served as a Sgt. in the U.S. Army during World War II for Company A, 113th Engineers, 38th Division. He was awarded a Good Conduct Medal, Philippine Liberation Ribbon with 1 Bronze Star, American Campaign Medal, Asiatic Pacific Campaign Medal with 3 Bronze Stars and a World War II Victory Medal. He worked as a weaver for Quality Fabrics Co. in Myerstown for 4 years prior to military service. After the war, he was an electrician for Shirk Electrical and Quaker Alloy in Myerstown for many years. After his retirement, he continued to work for Buckell Plastic Co., Inc. in Lewistown. He is survived by his children Nancy Gockley and her husband Glenn of Myerstown, Dennis Firestine of Bethel, and Sharon Schell and her husband Brian of Lebanon; grandchildren Sean and Justin Firestine, Kristel Bell, James Schware, and Ashley Britt; fifteen great grandchildren; and four great-great grandchildren with the fifth one on the way. Howard was preceded in death by brothers Walter (his twin), Nelson & Colonel Firestine, and sister Della Wagner. Memorial services will be on Thursday, December 30, 2021, at 10 a.m. at Kreamer & Lum Funeral Home & Crematory Rt. 72 & Camp Meeting Rd. Jonestown. A visitation will be held one hour prior to the service at the funeral home. Inurnment will be at Indiantown Gap National Cemetery with military honors. In lieu of flowers, memorial contributions may be made to Compassus, 1001 James Dr., Suite B34, Leesport, PA 19533.

Howard Firestine, 101, of Pine Grove, formerly of Myerstown and Lewistown, passed away peacefully on December 21, 2021. He was preceded in death by his wife Betty J. Firestine, whom he married on April 28, 1943. Born in Lebanon County on June... View Obituary & Service Information

The family of Howard Firestine created this Life Tributes page to make it easy to share your memories.

Howard Firestine, 101, of Pine Grove, formerly of Myerstown and...

Send flowers to the Firestine family.