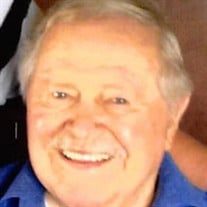 Henry J. Arnold, Jr., 93, of Lebanon passed away peacefully in his home on Tuesday, March 29, 2022. He was preceded in death by his beloved wife, Mildred I. (Sherman) Arnold. Henry and Mildred celebrated 71 years of marriage on October 14, 2021. Henry was born on January 6, 1929, the son of the late Henry and Mary (Heisey) Arnold. He was a graduate of Lebanon High School. He served as Sergeant First Class with the United States Army during the Korean War. Henry was a member of the Jonestown American Legion, Amvets, Perseverance Fire Company, VFW and numerous other clubs and organizations in the area. He enjoyed a long, fulfilling life and was known as a true optimist. He was a brilliant entrepreneur and owned many successful businesses over the years including insurance, real estate, construction, an auto auction, and used car lots. His true passion was farming, which he continued throughout his life. He oversaw the workings of his cattle farm until his passing. He was preceded in death by his son, Larry H. Arnold. He is survived by his loving children: Bonnie L. Wallish, wife of Gary Wallish; Edward J. Arnold, husband of Dawn L. Arnold; Sandra A. Podjed, wife of Donald L. Podjed; and Sharon L. Wartluft. In addition to his children, he is loved and admired by 13 grandchildren: Gary Wallish, Jr., Jamie Hund, Ashley Hawbaker, Christin Carrig, Brittany Tshudy, Nicole Urban, Shannon Pedrick, Danielle Truax, Gregory Wartluft, Jeffrey Wartluft, Eric Wartluft, Bryan Wartluft, and Lauren Wartluft. He will be greatly missed by 18 great-grandchildren, who loved to visit Pop and Mama on their farm. He is survived by sister, Elizabeth Wile, brother, Allen Arnold, and several nieces and nephews. He was preceded in death by sisters, Lucille Bashore and Rita Gloss. Mass of Christian Burial will be held on Thursday, April 7, 2022, at 11AM from St. Paul the Apostle Catholic Church, 125 S. Spruce St., Annville with Fr. Kevin Coyle as Celebrant. Interment with military honors will follow at Holy Cross Cemetery, Lebanon. A viewing will be held from 10AM until the time of the Funeral Mass at the church. Memorial contributions may be made to the Disabled American Veterans (DAV), 4219 Trindle Road, Camp Hill, PA 17011 or to the Knights of Columbus Ukraine Solidarity Fund at St. Paul the Apostle Church at the above listed address.

Henry J. Arnold, Jr., 93, of Lebanon passed away peacefully in his home on Tuesday, March 29, 2022. He was preceded in death by his beloved wife, Mildred I. (Sherman) Arnold. Henry and Mildred celebrated 71 years of marriage on October 14, 2021. Henry... View Obituary & Service Information

The family of Henry J. Arnold, Jr. created this Life Tributes page to make it easy to share your memories.