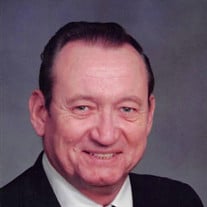 Henry T. Hill, 90, of Lebanon passed away on Sunday, July 4, 2021, at Elmcroft in Lebanon. He is survived by his wife, Rita (Allison) Hill with whom he celebrated 62 years of marriage. Henry was born in Brownsville, KY to the late James R. and Ethel (Blair) Hill. He was a US Air Force veteran of the Korean War Era. He worked as a civilian in logistics assistance for First Army at Indiantown Gap from which he retired in 1987. Besides serving in the Air Force for four years, he also served in the PA. Army National Guard and the U.S. Army Reserves retiring as a Chief Warrant Officer 4 in 1990. He was a member of Immanuel United Methodist Church in Cleona. He was also a member of Lebanon VFW and the Annville American Legion. He went on a mission trip to Kentucky. He enjoyed hunting, fishing, flying, woodworking, working in the yard, camping, and traveling. He was also involved with family genealogy, traveling to cemeteries to learn more family history. Surviving in addition to his wife are his children, Glenn Hill and his wife, Bonita, of Lebanon, James “Jim” Hill and his wife, Theresa, of San Antonio, TX, Lori Hill Shadow wife of David Shadow, of Camp Hill, 6 grandchildren and 13 great grandchildren. He was the last of seven children. He was preceded in death by his first wife, Elizabeth (Mease) Hill and his beloved dog, Reggie A memorial service will be held on Tuesday, July 13, 2021, at 11AM from Immanuel United Methodist Church, 29 E. Maple Street, Cleona. Interment will be at Indiantown Gap National Cemetery with military honors. There will be a visitation held with the family from 10AM until 11AM. In lieu of flowers, contributions can be made to his church, or the USO, please send a check or money order made payable to “USO” to: USO Department WS, PO Box 96860 Washington, DC 20090-6860. www.kreamerfuneralhome.com

Henry T. Hill, 90, of Lebanon passed away on Sunday, July 4, 2021, at Elmcroft in Lebanon. He is survived by his wife, Rita (Allison) Hill with whom he celebrated 62 years of marriage. Henry was born in Brownsville, KY to the late James R. and... View Obituary & Service Information

The family of Henry T. Hill created this Life Tributes page to make it easy to share your memories.

Send flowers to the Hill family.