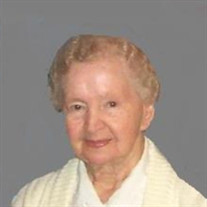 Helen B. (Ebersole) Heagy, 105, of Annville passed away on Saturday, June 5, 2021, at The Lebanon Valley Home. She was the wife of the late Irvin S. Heagy, who passed away in 2000. Helen was born in South Annville on February 2, 1916, to the late Henry and Mary (Behn) Ebersole. She was a graduate of Lebanon High School Class of 1933. She and her late husband, Irvin, owned and operated Heagy Electric for nearly 50 years. They also enjoyed spending winters in Sebring, FL. She was a member of the Fontana Union Sunday School and the Fontana United Christian Church. Helen enjoyed visiting with family and friends, doing word search puzzles, reading the newspaper, and playing cards and games. She was an avid Phillies fan and enjoyed watching the games on TV. She also enjoyed watching game shows, especially Wheel of Fortune and Jeopardy. She was known as “The Penny Lady”, as she would collect pennies and donate them to various charities. Surviving are her three daughters, Jean Funk of Annville, Carol Lentz of Palmyra, Eleanor Imhof of Chalfont, nine grandchildren, eleven great grandchildren, and three great great grandchildren. She was preceded in death by her siblings, Miriam Ebersole, Harry Ebersole, Mae Sellers, Erma Ebersole, and Mark Ebersole. A funeral service will be held on Saturday, June 12, 2021. at 11AM at Fontana United Christian Church, 22 Fontana Ave., Lebanon, PA. Interment will be in Gingrich Mennonite Cemetery, Lebanon. There will be a visitation from 10AM until 11AM at the church. In lieu of flowers, contributions may be made to Fontana Union Sunday School, 22 Fontana Ave, Lebanon, PA 17042.

The family of Helen B. (Ebersole) Heagy created this Life Tributes page to make it easy to share your memories.

Send flowers to the Heagy family.