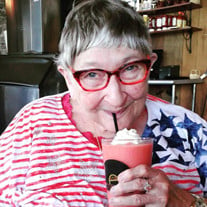 Hazel V. Swisher, born September 24, 1940, passed away peacefully on February 3, 2021, at Hill Farm Estate, Annville, her home for over the last five years, at the age of 80 years young. Known to many as “Nan”, her strong personality and sense of humor were shining through until the very end. Hazel is preceded in death by her daughter, Jody Lynn Binner Uhrich; her husband, Kenneth Robert Loraw; a granddaughter, Haley Marie Shott; her parents, Paul Felty and Emma Deiter Felty, and; brothers, Paul Felty, Jr. and Eddie Felty. Surviving are her granddaughter, in which she and Ken raised, Fallon Dannelle Binner, Fallon’s husband, Wesley McCurdy and her grandpup, Meeko, of Annville. Hazel also sadly leaves behind cousins Doug Leiby, husband of Annette Leiby, of Lebanon; Judy Wollerton, of Harrisburg; Joy Stevenson and her daughter, Julie Fox Moscal, of Mississippi, among others. Beyond these immediate family members, Hazel also leaves behind two special past colleagues and best friends until the end, Chuck Williams and Paul Zechman, as well as many, many more friends she met through the years who became her extended family and made her life very special. Hazel served the people of Lebanon County for over 40 years with her service in law enforcement and justice. She was a Lebanon County Deputy Sheriff for 21 years under four different sheriffs, and was the first female inducted into the Lodge No. 42, Fraternal Order of Police, and made a lifetime member of the F.O.P. upon her “retirement” from the Sheriff’s office in 1990. Also in 1990, Hazel was nominated by Governor Robert Casey to the position of District Justice, and confirmed by the Senate of Pennsylvania, receiving endorsement from both the Republican and Democratic Committees. She was then elected to the position in 1991 and served two terms from 1992-2004. Hazel later served as a senior magisterial district judge until 2013, and always in a fair and impartial manner, upholding her title with the utmost honor, demonstrating both justice and compassion as required by each situation. Hazel enjoyed reading, trips to Disney and New Orleans, Eagles football, the movie Sweet Home Alabama, the TV show Two and a Half Men, the Vogues music (especially Royce Taylor), funky shoes, and snazzy glasses and watches. She was previously a member of the Union Hose Social Club in Annville, and the Annville American Legion, where her and Ken enjoyed going before he passed away in 2016. Her career in justice and law enforcement is an inspiration, and the scales of justice are balanced more evenly in Lebanon County because of Hazel. She will be deeply missed by all who knew her. A viewing will be held at Kreamer Funeral Home & Crematory, 618 East Main Street, Annville, on Monday, February 8 from 5-7 p.m., and Tuesday, February 9 from 10-11 a.m. with services immediately following at 11 a.m. In lieu of flowers, donations can be made to First Aid & Safety Patrol EMS at 254 S. 11th Street, Lebanon, PA 17042.

The family of Hazel V. Swisher created this Life Tributes page to make it easy to share your memories.

Send flowers to the Swisher family.