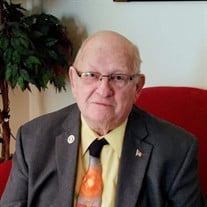 Gordon E. “Ed” Heishman, 87, of Lebanon, passed away at Chambersburg Hospital on Monday, February 7, 2022. He was preceded in death by his wife, Janet M. Heishman, who recently passed on January 27, 2022. Ed was born in Carlisle on July 16, 1934 to the late Gordon D. and Hazel (Mowers) Heishman, and his stepmother Bernice “Bonnie” (Thumma) Heishman. He was a graduate of Lancaster Bible College. He was a U.S. Marine Corps Veteran, and he served for 28 years. He served a tour in Korea, and two tours in Vietnam. He was a member of First Baptist Church in Lebanon, and he enjoyed bowling in his younger days, doing jigsaw puzzles, playing games on his I-Pad, and was an avid reader of his Bible. Surviving are his children Steven Heishman (Beverly) of Lebanon, Sharon Shaak of Lebanon, David Heishman (Suzanne) of Lebanon, Ronald Heishman (Teresa) of Reinholds, 8 grandchildren, and 9 great grandchildren. A memorial service will be held on Friday, April 8, 2022 at 11:30 a.m. from Kreamer & Lum Funeral Home & Crematory, Camp Meeting Road & Route 72, Jonestown. Interment will follow, where he and his wife will be laid to rest, at Indiantown Gap National Cemetery with military honors. There will be a visitation with the family from 10:30 a.m. until 11:30 a.m. In lieu of flowers, contributions may be made to his church, First Baptist Church, 20 Linden Rd., Lebanon, PA 17042.

The family of Gordon E. "Ed" Heishman created this Life Tributes page to make it easy to share your memories.

Gordon E. “Ed” Heishman, 87, of Lebanon, passed away at Chambersburg...

Send flowers to the Heishman family.