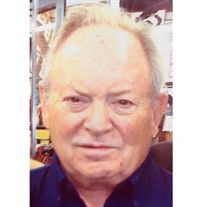 Gerry Silverberg, 83, of Enola passed away peacefully on Wednesday, April 13, 2022. He was preceded in death by his loving wife, Barbara A. (Loser) Silverberg. Gerry was the epitome of class and known as a truly distinguished gentleman. In addition to his love of European soccer, he was an avid baseball fan and passionate about the Phillies. His love of cooking and the arts was matched by his desire to donate to many causes close to his heart. But no cause was equal to the unbridled love he had for his family and the fun times spent with his buddy next door. Gerry was a man of chosen words, so when he spoke, people listened. He was a man of subtle emotion, so when he showed it, he meant it. Gerry was his own man. Born in the Bronx, New York on March 20, 1939, Gerry was the son of the late Alan and Sylvia Silverberg. Surviving are two sons, Lee Silverberg of Westbrook, CT, Robert M. Silverberg, and his significant other, Aimee J. Stern of Glastonbury, Connecticut, a stepson, Jeffrey A. Frazier, husband of Karin L. of Harrisburg, a stepdaughter, Lori A. Reddinger, and her significant other, John C. Smith III of Annville, a brother, Steve A. Silverberg, husband of Susan of New Hope, five grandchildren, Lindsay R. Reddinger, Megan E. Kefauver, wife of Joshua, Chelsea L. Reddinger, Kaitlyn A. Biesecker, wife of Jesse, Michael J. Frazier, and 4 great grandchildren. A public visitation will be held from 11:00AM to 12:00PM on Tuesday, April 19th, at Kreamer Funeral Home and Crematory, 618 E. Main St. Annville, PA 17003. Funeral Services will be held at 12:00PM at the Funeral Home. Interment will be held at Covenant/Greenwood “Ebenezer” Cemetery, Lebanon. In lieu of flowers, contributions can be made to the Prader-Willi Syndrome Association, www.pwsaus.org, in honor of Gerry’s granddaughter, Chelsea L. Reddinger. Kreamer Funeral Home and Crematory, Annville is handling arrangements.

Gerry Silverberg, 83, of Enola passed away peacefully on Wednesday, April 13, 2022. He was preceded in death by his loving wife, Barbara A. (Loser) Silverberg. Gerry was the epitome of class and known as a truly distinguished gentleman. In... View Obituary & Service Information

The family of Gerry Silverberg created this Life Tributes page to make it easy to share your memories.

Gerry Silverberg, 83, of Enola passed away peacefully on Wednesday,...

Send flowers to the Silverberg family.