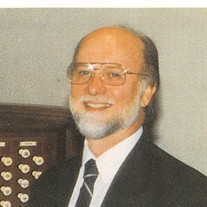 George D. Curfman, 90, of Palmyra formerly of Annville, died Friday, December 10, 2021, in the Hostetter House, Londonderry Village, Palmyra. He was the husband of the late Virginia Anne Wagner Curfman who died in 2011. Born in Williamsport, MD on February 13, 1931, he was the son of the late George T. and Alma R. Keller Curfman. He retired in 1994 from Lebanon Valley College, where he worked as a professor of music education. George was a U.S. Army veteran of the Korean War, graduated from Williamsport High School, MD in 1949, received his music degree from Lebanon Valley College in 1953, his master’s degree from the University of Michigan, and his doctorate from Penn State University. He was a member of Palm Lutheran Church, Palmyra, past president, and Paul Harris Fellow of the Annville Rotary Club, and a member of the PA Music Educators Association, where he served on a committee to establish public school music curriculum requirements. He served as the organist for St. James Lutheran Church, Messiah Lutheran Church both of Lebanon, and St. Mark Lutheran Church, Annville. Surviving is a son Thomas P., husband of Annette Baker Curfman of Palmyra; a daughter Lois Curfman McInnes, wife of John Stanley McInnes of Rockville, MD; and four grandchildren: Anastasia Curfman, Garrett Curfman, Joanna McInnes and Mariel McInnes. Memorial services will be held on Thursday at 9:00 AM at the Kreamer Funeral Home and Crematory, 618 E. Main Street, Annville with inurnment in Indiantown Gap National Cemetery. In lieu of flowers, contributions may be made to Palm Lutheran Church, 11 W. Cherry Street, Palmyra, PA 17078 in his memory.

George D. Curfman, 90, of Palmyra formerly of Annville, died Friday, December 10, 2021, in the Hostetter House, Londonderry Village, Palmyra. He was the husband of the late Virginia Anne Wagner Curfman who died in 2011. Born in Williamsport,... View Obituary & Service Information

The family of George D. Curfman created this Life Tributes page to make it easy to share your memories.

Send flowers to the Curfman family.