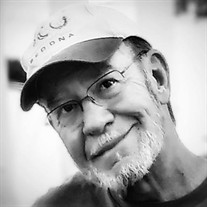 On October 11, 2021 Gary A Winters left this world and entered into his heavenly home. He was the cherished husband of Joyce Trudell Winters to whom he was married for fifteen years. Born in Lebanon, PA on May 10, 1948, he was the son of the late Norman R. and Betty J. Winters. Gary graduated from Annville-Cleona High School in 1966 . He then joined the U.S. Army and served his country in Japan. After his military stint he enrolled and graduated from Penn State University eventually starting a 30+ year career as an emergency evacuation trainer and planner. He was quite proud of his work and was highly esteemed in his field. Gary was an accomplished musician, playing the trumpet, writing and arranging music, and singing. In the early 1970’s he formed a gospel group with his brothers called The Joyful Noise performing throughout PA at many churches and venues for nearly a decade. He was also a member of the Condran Trio for many years, and he formed a trumpeting duo called The Brass Jacks with his friend, Josh Fields, whom he had mentored on the trumpet as a child. Gary loved the Lord, his country, and his family. He was a man of honor, integrity, unselfish to a fault, kind, patient, strong, and humble. He was a devoted husband, loving brother, wonderful father, helpful stepfather, patient Grampy, caring uncle, and faithful friend. Other than his wife, he is survived by his three brothers and their wives, Curt and Kay Winters, Cedric and Dianne Winters, Duane and Betsy Winters, as well as his adopted son, three stepchildren, five step grandchildren, and many nieces, nephews, and cousins. He will be missed by many forever. Memorial services will be held on 10/30/2021 at the Kreamer Funeral Home, 618 E Main St, Annville, PA. Visitation will be held from 10-11am prior to service. Inurnment will be at convenience of family.

On October 11, 2021 Gary A Winters left this world and entered into his heavenly home. He was the cherished husband of Joyce Trudell Winters to whom he was married for fifteen years. Born in Lebanon, PA on May 10, 1948, he was the son of the... View Obituary & Service Information

The family of Gary A. Winters created this Life Tributes page to make it easy to share your memories.

Send flowers to the Winters family.