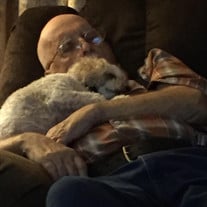 Furman D. Parker, 88, of Annville died Wednesday, March 10, 2021 at his residence. He is survived by his wife, Marion McFeaters Parker who was the love of his life. They would have celebrated 69 years of marriage in April. Born in Berks County on February 18, 1933, he was the son of the late Amos Parker and the late Esther Harman Parker. Furman was a member of Ono United Methodist Church, the Bellegrove Fire Company Fire Police, and belonged to the Palmyra Sportsman’s Association for many years. He worked for Sowers Printing for 23 years where he received many awards and accolades for his work. He participated in correspondence course of study in offset presswork conducted by Technical Education Department. He participated in Sowers Printing Company portion of Central PA leadership Seminar, Hugh O'Brian Youth Foundation. He participated in development of an academic program in the graphic arts education field for Williamsport Area Community College. He was the lead pressman running the 6 color Heidelberg Press. Furman was called on by the Heidelberg Company to go anywhere in the US that needed assistance with their presses. After retirement he worked part time at Palmyra Walmart as a greeter where he enjoyed meeting and talking to everyone. He received many awards for his work with Toys for Tots. He was an avid Nascar fan and loved to cheer on his favorite driver, Jimmie Johnson. He would spend endless hours doing yard work and working in his garden. He also loved his pups and would rarely be seen without his beloved poodle by his side. Family meant everything to him. He loved spending time with family any chance he could, from family picnics to watching his grandchildren play sports. He loved Rehoboth and Dewey Beach and Grotto pizza. Surviving in addition to his wife are 4 sons, Donald L. Parker, husband of Joan Parker of Annville, Richard A. Parker, husband of Deborah Parker of Annville, Randy S. Parker, husband of Gail Parker of Annville, Timothy S. Parker of Palmyra, a daughter, Kimberly S. Ulrich, wife of Richard Ulrich of Cleona, and 9 grandchildren. He is preceded in death by his 3 brothers, Edwin Parker, Amos Parker, Jr., and Calvin Parker. A public viewing will be held on Wednesday, March 17th from 6:00-8:00 PM at Kreamer Funeral Home and Crematory, 618 E. Main St. Annville, PA 17003. Funeral services will be held on Thursday, March 18th at 11:00 AM at Ono United Methodist Church, 9 Main St. Ono, PA 17077. A public viewing will be held on Thursday at 10:00 AM. Interment will be held at Ono Cemetery following the funeral services. Please follow COVID-19 protocols with mask wearing and social distancing.

Furman D. Parker, 88, of Annville died Wednesday, March 10, 2021 at his residence. He is survived by his wife, Marion McFeaters Parker who was the love of his life. They would have celebrated 69 years of marriage in April. Born in Berks County... View Obituary & Service Information

The family of Furman D. Parker created this Life Tributes page to make it easy to share your memories.

Send flowers to the Parker family.